SEOUL, April 6 (Yonhap) -- A sweeping corruption scandal and the ensuing ouster of their president wreaked havoc on many Koreans' pride. Institutions were neutered, procedures ignored and the brightest minds manipulated by the disgraced leader and a handful of cohorts seeking money and power.

As Koreans are struggling to emerge from the wreckage, there could be a silver lining -- a heightened democratic awareness among citizens and a fresh political reform movement even among the most deeply trenched old-guard politicians.

As shocking and shameful as they may be, the events that culminated in the dismissal of Park Geun-hye may have been a bitter pill for the development of the country's relatively young and still evolving democracy, experts say. 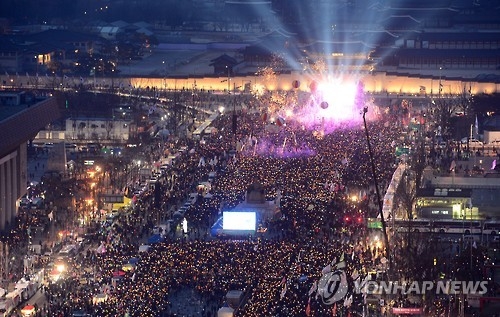 "It will continue to provide a source of pain for all for a very long time, but I believe it was a necessary and desirable rite of passage for us to become a responsible and competitive member of the international community," said Sohn Seung-pyo, a social science professor at Seoul's Dongguk University.

The March 10 removal of Park from her office marked the first time that a democratically elected Korean president has been ousted by impeachment.

The change was driven by weekly protests that hundreds of thousands of citizens staged every weekend since the scandal broke in late October.

The collective experience of popular power is expected to lead to higher voter participation in the upcoming presidential election, surveys show.

In a recent poll conducted by the Korea Society Opinion Institute, a whopping 93.4 percent of 1,016 voters surveyed said they would vote in the May 9 presidential election.

The voter turnout in the previous presidential election in 2012 was 75.8 percent, following 63 percent in 2007. 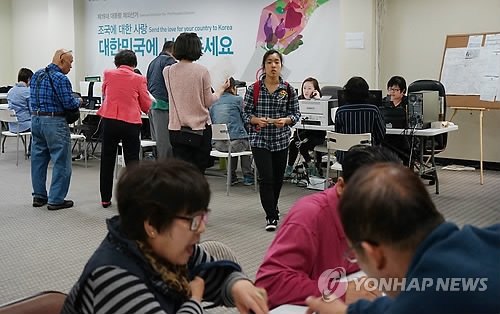 The Park miasma should be a wake-up call for many apathetic voters like Kim Young-ah, for whom election days have been simply a day off when she can go on a trip or spend time with her family.

"The upcoming presidential election will come at the end of a long, temporary school break for my daughters, during which we plan to go overseas for a vacation. But we will cut our trip short if we have to, to take part in the election," the 41-year-old housewife and mother of two daughters said.

Crumbled public trust in the national system appears to be recovering after the unanimous decision by the Constitutional Court to sack the leader. Immediately after the ruling, Korea swung into an election mode, in which restoration of justice, democracy and equal rights are likely to figure prominently.

The election will be the first presidential vote to be held in May in at least three decades. The country's Constitution requires an election to be held within 60 days of the removal or resignation of a president.

Barring changes to the presidential term, the following elections will likely be held in March, or at least 60 days before the next president's five-year term expires on May 9 as required by the Constitution.

Since 1987, presidential elections have been held in December, with new presidents inaugurated in February. 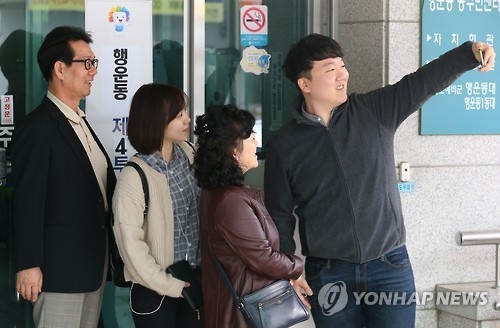 The electoral landscape has already tilted in favor of liberals with Moon Jae-in, former rival of Park in the 2012 election, topping all public polls for the past three months.

Whatever the election results may be, experts see a glimmer of hope for Korean democracy in the reform movement among political conservatives in the wake of the colossal downfall of their leader.

The former ruling Saenuri Party has split into two camps, both of them making claims to reforms for the future. More than 30 dissident lawmakers defected from the party and set up the Bareun Party, and the members of the pro-Park mainstream renamed Saenuri as the Liberty Korea Party.

The two sides are in fierce competition for conservative votes in the face of growing calls for uniting their campaigns for a chance to fight front-runner Moon.

The Liberty Korea Party's nominee, Hong Joon-pyo, continues to urge an immediate and unconditional merger but the smaller Bareun Party's Yoo Seong-min has rejected the offer as bordering on an insult.

"Yoo apparently understands the fact that a merger may be viewed by the people as another compromise or concession to injustice," an observer noted, asking not to be identified.

The split and realignment of political forces have been a norm before Korean elections. But the current divergence in the right was triggered by a drive by self-claimed reformists with bold programs for economic justice, welfare and diversity as much as the usual political calculation.

"Now that the country has shown the entire world its potential to become a great democratic nation by peacefully removing its elected leader from office, the upcoming election will be a chance to show its potential to share and embrace different ideas and values of various groups to create a harmonious synergy," the professor added.

(Yonhap Feature) After political turmoil, Koreans get wake-call for democracy

(Yonhap Feature) After political turmoil, Koreans get wake-call for democracy