SEOUL, April 2 (Yonhap) -- South Korea's presidential race is set to begin in earnest this week after all parties nominate their standard-bearers.

The nominations scheduled for this week are those of the largest Democratic Party and the minor People's Party, the two liberal parties that have arguably drawn the most interest in the wake of the ouster of conservative President Park Geun-hye. 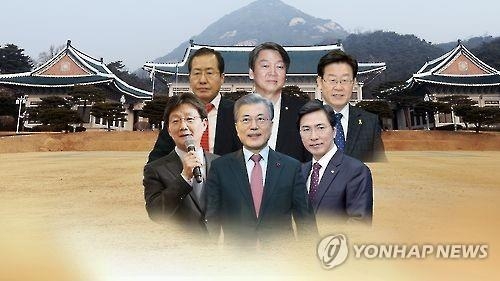 On Monday, the Democratic Party is scheduled to name its presidential candidate amid expectations its former leader Moon Jae-in will clinch the nomination and win the election on May 9 too.

Moon has recently led in all presidential surveys with approval ratings in the 30 percent range.

The People's Party, which was created by defectors from the Democratic Party, is set to announce its nominee on Tuesday, as Rep. Ahn Cheol-soo emerges as a possibly formidable opponent to Moon.

If Ahn wins the nomination, he will likely face off against Moon in a deja vu match reminiscent of the 2012 presidential election. In that race, Ahn competed with Moon for liberal votes but later dropped out in support of Moon.

Should no contender secure a majority of the vote, the Democratic Party will hold a runoff on Saturday and the People's Party will do the same on Thursday.

Whoever wins the two parties' nominations will compete against South Gyeongsang Province Gov. Hong Joon-pyo of the Liberty Korea Party and Rep. Yoo Seong-min of the Bareun Party.

The election comes seven months earlier than scheduled after Park was dismissed over a corruption scandal.

S. Korea's presidential race to kick off in earnest this week

S. Korea's presidential race to kick off in earnest this week