SEOUL, April 1 (Yonhap) -- South Korea's Acting President Hwang Kyo-ahn on Saturday called for a painstaking search for the remains of those killed in the 2014 Sewol ferry sinking.

"The top priority is to recover the remains," he said during a visit to a Mokpo port in the southwestern province of Jeolla.

It has become the new home of the 6,825-ton ship, which sank off the nearby coast in an apparent accident. It left 304 people, mostly students, dead. Nine people are still missing.

The ship was brought to surface last week almost three years after the sinking and taken to the port on a semisubmersible ship.

Hwang, who's also the country's prime minister, also met with the families of the victims and expressed his condolences.

He stressed the government will make utmost efforts to recover the remains through a swift and thorough search operation, along with a full survey of the salvaged hull.

Many hope that it will help determine the exact cause of the ferry's sinking as well. 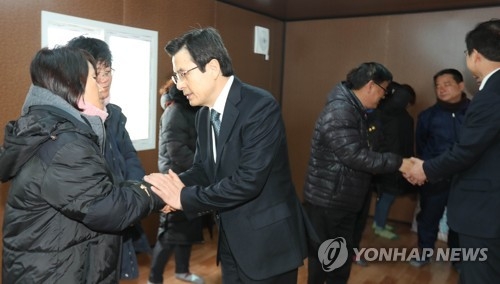