It was one of five games played across the nation to start the KBO's 36th season.

Nippert, a 22-game winner in 2016, picked up right where he left off on Friday, holding the Eagles to just four hits while striking out seven. He improved to 5-1 on Opening Days. 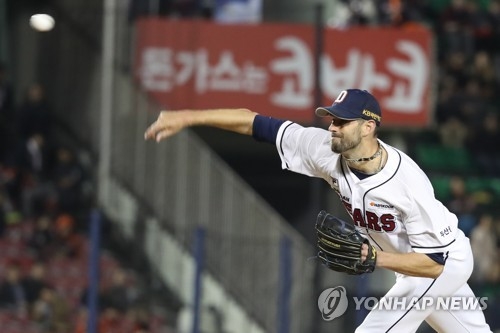 Nippert had a shaky start to the game, giving up a single and a walk in the first inning. He got some help from his defense when Wilin Rosario lined out to second baseman Oh Jae-won, who doubled off Kim Won-seok at second base.

The Eagles' defense couldn't do the same for their starter, Carlos Villanueva. In the third, Park Kun-woo reached on an error, and later came around to score on Min Byung-hun's sacrifice fly for a 1-0 lead.

In the sixth, Kim Jae-ho went from first to third on a steal attempt when Hanwha catcher Cho In-sung made a wild throw to second. Nick Evans then brought him home with a sac fly.

Hur Kyoung-min's RBI single in the seventh rounded out the scoring for the winning side.

The Eagles committed four errors, a record in an Opening Day game.

Elsewhere in the league, the LG Twins edged out the Nexen Heroes 2-1 on the road at Seoul's Gocheok Sky Dome.

Lee Hyung-jong, a converted pitcher, hit a solo home run for the Twins to back a strong start by right-hander Henry Sosa in the narrow victory.

The Twins scored the first run on a Nexen error in the top second. With a man at first and two outs, Chung Sang-ho popped one to shallow center field, and center fielder Ko Jong-wook dropped the ball while trying avoid a collision with second baseman Seo Geon-chang.

Choi Jae-won, the runner at first, just beat the throw home to make it 1-0 for the Twins.

Lee Hyung-jong doubled the Twins' lead with a solo blast in the top of the third, lifting a low fastball from Nexen starter Andy Van Hekken over the right-center field.

The Heroes managed just two singles off Sosa through five innings, but got a run back on Sosa's error in the bottom sixth.

With runners at the corners, Lee Taek-keun hit a dribbler down the first base line that Sosa couldn't field cleanly, which allowed Kim Ha-seong to score easily from third and Seo Geon-chang to move from first to third. 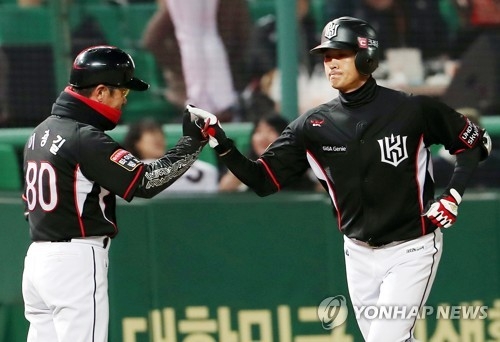 Sosa prevented further damage by getting Chae Tae-in to ground into an inning-ending double play.

With the tying run 90 feet away, Kim Min-sung hit a hard grounder right at third baseman Luis Jimenez, who threw out Park at home plate.

Another wild pitch by Lee and a walk put runners at first and second for the Heroes, but Kim Ha-seong lined out to short to kill the rally.

The Heroes came up short again in the bottom of the ninth. Pinch hitter Huh Jung-heop led off the inning with a double off Shin Jung-rak, but the LG right-hander quickly settled down by striking out the next two batters.

Shin issued a walk and handed the reins over to Jeong Chan-heon, who struck out Ko to preserve the victory.

Sosa earned the victory after allowing a single run on four hits over 6 1/3 innings. He walked two and struck out two.

Van Hekken, the losing pitcher, didn't look particularly sharp in giving up two runs -- one of them unearned -- in six innings. His fastball sat around 135 kph (84 mph) and the left-hander didn't have a good command of his breaking pitches.

It was also the Wiz's second straight Opening Day victory over the Wyverns.

After the Wiz built a 2-0 lead after two innings, the Wyverns got one back with Kim Kang-min's RBI single in the bottom third. They loaded the bases with one out later in the inning, but Jung Eui-yoon grounded into a 5-4-3 double play

The Wiz restored a two-run lead on a groundout by Lee Dae-hyung in the fourth. The Wyverns got to within one again on Choi Jeong's double in the fifth, but that was their last run of the night. 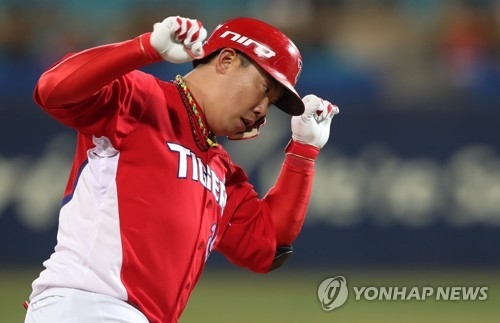 Kia left fielder Na Ji-wan belted out two home runs, including a grand slam in the eighth, and starter Hector Noesi held the Lions to a run over seven innings while striking out six.

Na broke the scoreless deadlock with a solo blast in the second, the first home run in the league this season. Koo Ja-wook matched it for the Lions with a solo homer of his own in the fourth, but that was the only run they could muster off Noesi.

With the Tigers nursing a 2-1 lead, Na stepped up with the bases full and took reliever Kim Seung-hyun over the right field for a 6-1 cushion.

Kim Joo-chan added a solo homer for the Tigers in the top of the ninth. Darin Ruf, former big leaguer making his KBO debut for the Lions, got one back with a solo home run but it was too little, too late for the home team.

Former Lions' slugger Choi Hyoung-woo went 1-for-4 with an RBI in his Tigers debut. The reigning batting champion signed with Kia as a free agent over the winter.

Jeff Manship, who pitched in last year's World Series for the Cleveland Indians, got his first KBO win for the Dinos after allowing just one run on two hits in seven innings.

Lee Dae-ho, former Seattle Mariners first baseman who rejoined the Giants last winter for his second tour of duty, knocked in Lotte's first run with a single in the fourth. 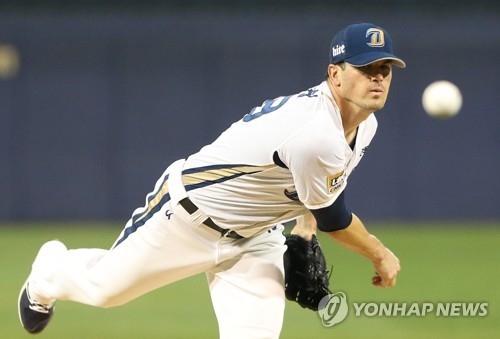 But the Dinos erased the 1-0 deficit in a three-run sixth. Lotte starter Brooks Raley, after keeping the Dinos off the board for five innings, gave up a walk and two doubles in the sixth, including the go-ahead two-better by Mo Chang-min that ended Raley's day.

In the seventh, Xavier Scruggs pounded his first KBO homer for the Dinos, a two-run shot that extended the lead to 5-1. An infield single by Mo made it 6-1 later in the inning.

The Dinos, though, made things interesting, with a series of errors that led to three runs for the Giants in the eighth.

Lee Dae-ho hit a solo shot in the top of the ninth to make it a one-run affair, but closer Lim Chang-min caught a break when Lee Woo-min was caught stealing third for the final out of the game.

For the first time since the league allowed foreign players in 1998 every team used an import starter on the Opening Day.