SEJONG, April 1 (Yonhap) -- South Korea's exports rose for the fifth straight month in March on the back of brisk sales of chips, displays and cosmetics, the trade ministry said Saturday.

Outbound shipments came to a more-than-two-year high of US$48.9 billion last month, up 13.7 percent from $43 billion tallied a year earlier, according to the Ministry of Trade, Industry and Energy.

The country's exports have been on a steady rise since November on an uptick in oil prices. Last month marked the first time since December 2011 that exports have risen for five consecutive months.

Imports soared 26.9 percent on-year to $42.3 billion in March to record the largest monthly total since December 2014, when they hit $43.9 billion. 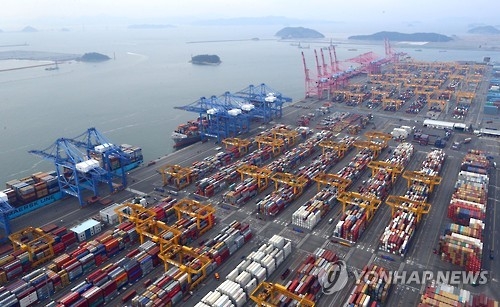 The average daily exports value rose 13.7 percent on-year to a nearly two-year high of $2.04 billion in March, with won-denominated exports also rising 8.5 percent for five months in a row.

Exports of locally made chips surged 41.9 percent on-year to a fresh record high of $7.5 billion in the one-month period due to increasing demand for cutting-edge smartphones.

Overseas sales of flat screens continued their upside cycle to jump 19.5 percent last month from a year earlier to a seven-month high of $2.34 billion, while shipments of petroleum products shot up 63.3 percent to $3.08 billion, the largest since June 2016, amid an uptick in oil prices.

Exports of cars rose for two straight months in March to gain 4.1 percent on-year, while those of machinery vaulted 17.6 percent last month.

On the downside, exports of wireless devices, such as mobile phones, backtracked for the eighth straight month, dropping a record 26.4 percent on-year. The poor showing reflects the fallout from the recall of the Galaxy Note 7 phablet.

By region, South Korea's exports to China expanded 12.1 percent last month from a year earlier to mark the first five consecutive months of increase in 35 months, while those to Vietnam moved up for the 14th month in a row in March.

Exports to Japan also landed in positive terrain for the fifth straight month to post an 18 percent jump in March led by a rise in exports of petrochemicals and steel products.

However, exports to the United States decreased 5.3 percent in March on weak demand for wireless devices and auto parts, with a trade surplus with the world's largest economy falling to $23.3 billion from $25.8 billion over the one-year period.