SEOUL, April 1 (Yonhap) -- South Korean figure skater Choi Da-bin has secured two spots for the country at next year's Winter Olympics with a strong finish at the world championships.

With that result, Choi has clinched two spots for South Korea in the ladies' singles at the PyeongChang Winter Games. Skaters finishing in the top two at the world championships bring home three Olympic tickets, while those finishing from third to 10th each earn two Olympic berths for their countries.

By breaking her previous personal record by 8.70 points, Choi, 17, now owns the second-highest score by a South Korean female skater, after the 228.56 points by former Olympic champion Kim Yu-na.

"I am pleased to exceed my own expectations," Choi said. "Before the short program, my goal was to earn one Olympic spot. I struggled early in the season, but I am really happy to end the season on a high note." 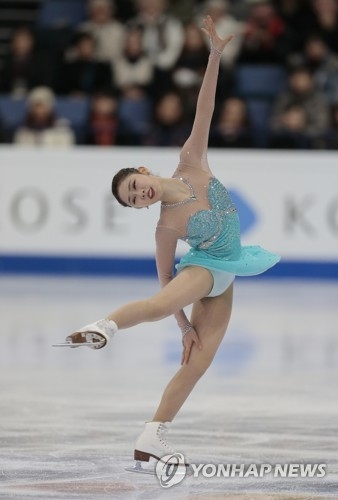 To the sound track of the film "Doctor Zhivago," Choi executed a clean triple lutz-triple toe loop combination at the start.

Choi also had a clean triple salchow and a double axel.

Choi has been on a roll this spring. In February, she finished fifth at the ISU Four Continents Figure Skating Championships in South Korea with the then-personal best score of 182.41 points. She broke that mark with 187.54 points to win the gold medal at the Sapporo Asian Winter Games later in February.

Evgenia Medvedeva of Russia captured her second straight world championship in Finland with 233.41 points, breaking her own world record by 3.70 points.