SEOUL, April 1 (Yonhap) -- North Korea claimed Saturday that the United States is putting the peninsula in danger of another war by continuing "madcap" military drills in the region.

The Korean Central News Agency (KCNA) reported B-1B Lancer strategic bombers made a series of flights over Korea between March 15 and 30.

The B-1Bs from Guam conducted bombing drills in South Korea's airspace on five sorties in preparation for a surprise attack on the North's major targets, the communist nation's state news agency added.

The U.S. Forces Korea (USFK) made public a joint exercise involving one B-1B bomber and South Korea's fighter jets held on March 22. It would not confirm whether the bomber made other sorties here.

"The deployment of such bombers on the Korean Peninsula is made in accordance with a related training program. We do not reveal every information," a USFK official said.

But a South Korean defense source said it's true that the U.S. flew B-1Bs over Korea five times in the past two weeks.

The source cited the allies' principle of only disclosing specific moves of strategic weapons when necessary. 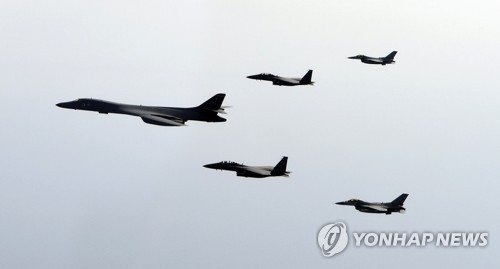 The KCNA also took issue with a reported exercise of American special forces here, calling it a "madcap rehearsal for carrying out the beheading operation," which drives the situation into "the most extreme phase."

It was referring to the possibility of the U.S. trying to take out the North's leadership.

South Korea and the U.S. have been carrying out their annual combined defense drills since early March. The North has long responded angrily to the allies' move.

This year, in particular, Pyongyang has shown a sensitive reaction to rumors of a possible pre-emptive attack or an operation to remove leader Kim Jong-un.

The Donald Trump administration has stated that it will consider "all options" to deal with North Korea.