"It's a resolute warning message," a foreign ministry official said in response to Washington's announcement that it has blacklisted a North Korean trading firm and 11 individuals believed to be involved in the financing of the Kim Jong-un regime's weapons of mass destruction development.

It marks the first punitive step by the Donald Trump administration particularly on Pyongyang since it was launched in January, the official noted.

The move reminds Pyongyang that it has no choice other than denuclearization, he added.

On his trip to Seoul last month, U.S. Secretary of State Rex Tillerson made it clear that the North would face more pressure and sanctions if it remains recalcitrant. He stated that the U.S. leaves "all options" on the table, indicating that military action would be considered if needed.

The fresh sanctions on Pyongyang aim to help cut the financial source of the North's missile and nuclear programs.

The sanctioned entity, Paeksol Trading Corp., has traded North Korean coal and minerals, with the 11 individuals linked to the North's banks, defense industries and arms sales.

"Today's sanctions are aimed at disrupting the networks and methods that the government of North Korea employs to fund its unlawful nuclear, ballistic missile and proliferation programs," Treasury Secretary Steven Mnuchin said in a statement, "I urge our partners and allies to take similar measures to cut off its funding."

It's unclear whether Pyongyang will feel the pinch from the additional sanctions as it's already shackled by a wide web of U.N.-led sanctions.

The measure came amid reports that the secretive nation is preparing for another nuclear test and more missile launches. 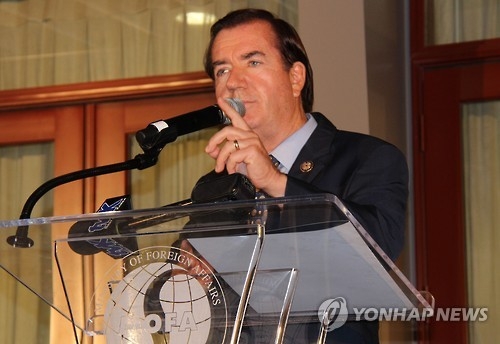 A senior U.S. lawmaker called for strong measures similar to the 2005 freezing of the North's assets at Banco Delta Asia (BDA), a bank in Macau.

"What we aim to do is drive a policy where those front companies and banks that right now are making it possible for North Korea to circumvent the previous sanctions that I passed last year -- we are going to shut down their capability of transferring any of that hard currency to North Korea," House Foreign Affairs Committee Chairman Ed Royce (R-CA) said in an interview with Fox Business.

"During that time we know that their dictator could not pay his generals -- not a good position for him to be in -- and he had to shut down the production line for his weapons systems," he added. "That’s what we need to do here. We need to cut off the life support for the regime’s ability on this weapons program."

The House committee recently passed a set of bills against the North.

The Rodong Sinmun, the main organ of the ruling Workers' Party of Korea (WPK), argued that nothing can stop the country's military and people.