SEOUL, April 1 (Yonhap) -- The conservative Liberty Korea Party on Saturday appointed its new secretary-general and a chief aide for its standard-bearer in the upcoming presidential election.

The appointments came one day after South Gyeongsang Province Gov. Hong Joon-pyo won the party primary to be named the presidential candidate of the former ruling party in the May 9 election.

Both Lee and Yoon are said to be close to the presidential candidate.

The appointments also came one day after the party's former interim chief In Myung-jin quit, immediately following the end of the party primary.

In, a Christian pastor with no significant political background, had been asked to steer the conservative party in the wake of a massive corruption scandal that has led to the removal and arrest of former President Park Geun-hye. 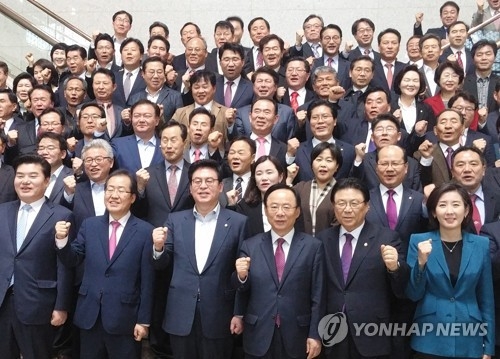 "The party chief automatically becomes a co-head of the election committee," a party official said, asking not to be identified.

Apparently rearranging itself into support mode for its presidential candidate, the party has also named a professor from Dongseo University in the southern port city of Busan the head of what it calls the retinue of its candidate Hong.

Meanwhile, Hong said his rivals in the party primary have agreed to help his campaign as well.

"Today, we all became one," Hong said after a dinner meeting with all three other contenders in the party primary. They are former lawmaker Rhee In-je, North Gyeongsang Province Gov. Kim Kwan-yong and Rep. Kim Jin-tae, a die-hard loyalist of impeached former leader Park Geun-hye.

Hong and his conservative party are widely expected to fight an uphill battle against presidential front-runner Moon Jae-in of the liberal Democratic Party.

In the latest survey released Friday by Gallup Korea, Hong placed fifth with a 4 percent approval rating. Moon maintained his lead with 31 percent, followed by Rep. Ahn Cheol-soo of the liberal People's Party with 19 percent.
(END)