SEOUL, April 2 (Yonhap) -- South Korea's department store market is estimated to have fallen short of a landmark 30 trillion won (US$26.8 billion) last year, due to weaker-than-expected sales amid the high-profile scandal that led to former President Park Geun-hye's impeachment and the growth of online shopping, industry sources said Sunday.

But the scandal and the poorer-than-expected sales during the winter season sapped such speculation, they said.

The big three players -- Lotte, Hyundai and Shinsegae -- account for 80 percent of the market share, while Galleria, AK Plaza and other smaller brands hold the remaining share.

The market value has remained at some 29 trillion won for the past five years amid weak domestic consumption and the rise of e-commerce marketplaces, but it was widely predicted to have expanded last year after leading players stepped up investments in stores.

Shinsegae Department Store renovated its flagship store in the affluent Gangnam district last year, while opening new outlets in Hanam, south of Seoul, and Gimhae on the southeastern coast. Starfield Hanam is the nation's largest shopping theme park that offers a wide variety of options for shopping, leisure and culinary experiences.

Hyundai Department Store said it posted strong sales since opening a mega store in Pangyo, south of Seoul, in August 2015. 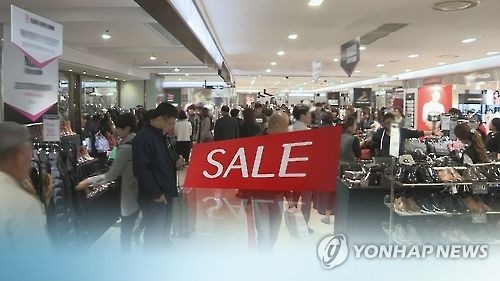 For the year, the local department stores are unlikely to see their sales exceed 30 trillion won as well given an ongoing diplomatic spat between Seoul and China over the former's deployment of a U.S. missile defense scheme.

But China has taken a number of economic retaliatory measures, including restrictions on South Korean imports and a ban on Chinese tourists from visiting the neighboring nation, as Seoul refused to give in to Chinese pressure to scrap the decision.