SEOUL, April 2 (Yonhap) -- Samsung Electronics Co. said Sunday that it has kicked off an all-out promotional drive to allow as many consumers as possible to check out its newest Galaxy S8 smartphone.

The world's leading smartphone manufacturer said it has opened some 3,000 special stores all across South Korea where people can actually hold and experience the various cutting-edge features of its flagship device.

The S8 has gotten mostly positive initial reviews for its panel-centric form factor that has done away with the physical home button up front and incorporates the Bixby artificial intelligent system that is expected to greatly enhance user experience compared with other handsets. The phone comes with meaningful accessories like the Samsung Dex dock that can turn the smartphone into a desktop computer.

The tech giant said the stores that have been opened to the public since Saturday are located in many Hi-mart stores, RT Land, its own Samsung Digital Plaza and outlets of local mobile carriers.

It has opened 40 special premium lounges where people will be able to immerse themselves in the new device and its many capabilities. The lounges will be placed in retail hubs, such as Seoul's Famille Station and Centum City in the country's largest port city of Busan, with numbers to be increased to 80 by next month.

Samsung said that it has started taking preorders for the new phones that will hit stores April 21. 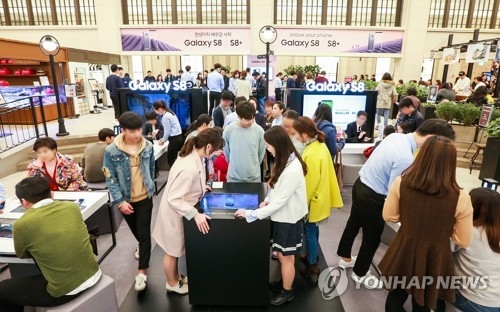