GANGNEUNG, South Korea, April 2 (Yonhap) -- Hundreds of South Korean supporters were on hand to root for North Korean players at the start of the women's hockey world championships on Sunday.

North Korea fell to Australia 2-1 at the International Ice Hockey Federation (IIHF) Women's World Championship Division II Group A at Gangneung Hockey Centre in Gangneung, Gangwon Province, some 230 kilometers east of Seoul. But the loss clearly wasn't for any lack of support.

Nearly 300 members of a civic group, the South Korean Committee for the Joint Implementation of the June 15 Summit Declaration, took up a section across from the North Korean bench at the arena, banging thundersticks and chanting messages like, "We Are One!" and "Go Korea!" They waved the Korean Unification Flag, with the whole Korean Peninsula colored in blue, and also donned sweaters bearing the same image. 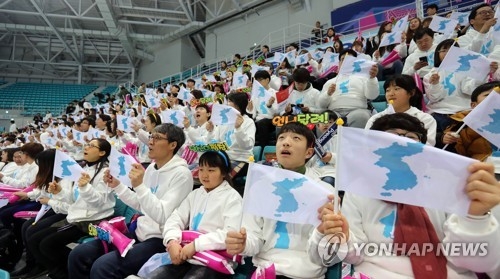 The committee was formed in 2005 to carry out the philosophy and handle issues raised in the joint North-South declaration following the first inter-Korean summit on June 15, 2000. The landmark declaration outlines inter-Korean reconciliation and economic cooperation.

The committee members will attend all five North Korean games during the tournament, including the highly anticipated showdown versus South Korea at 9 p.m. Thursday.

The Netherlands, Slovenia and Britain are other participants of the competition, which will wrap up Saturday.

The group officials said their members include displaced North Korean natives who settled south of the border after the 1950-53 Korean War.

The two Koreas are technically in a state of war since it ended in a truce, not a peace treaty.

The all-Korea hockey game will come on the eve of a women's football match between the countries in Pyongyang. These contests could help ease strained inter-Korean relations and exchanges sparked by North Korea's nuclear and missile programs, though the South Korean government has downplayed the significance of the occasion.

"We should be unified as one," said Lee Chang-bok, head of the cheering squad. "We hope our enthusiasm can reach the hearts of the North Korean athletes and help lay the foundation for unification." 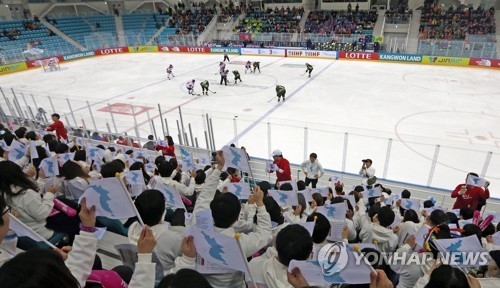 S. Koreans come out in droves to cheer on N. Korean hockey players

S. Koreans come out in droves to cheer on N. Korean hockey players