INCHEON, April 2 (Yonhap) -- South Korean women's national football coach Yoon Duk-yeo said Sunday his side will return home with a victory against North Korea when the two neighbors collide in a qualifying match for a regional tournament across the border.

"We will return home with good results so that our efforts are worth it," Yoon said at Incheon International Airport before departing for China. The women's team will enter Pyongyang from Beijing on Monday.

The much-anticipated all-Korean showdown is slated for Friday. Yoon admitted that North Korea is a stronger team than South Korea on paper, but his players are confident of upsetting the archrival in the North Korean capital.

North Korea are ranked No. 10, third highest among all AFC members, in the latest FIFA rankings, followed by South Korea (No. 17), Uzbekistan (No. 42), India (No. 56) and Hong Kong (No. 65). They have also dominated South Korea so far with 14 wins, one loss and two draws. The only South Korean victory came in 2005, and their most recent meeting, the 2016 Olympic qualifying match in February last year, ended in a 1-1 draw. 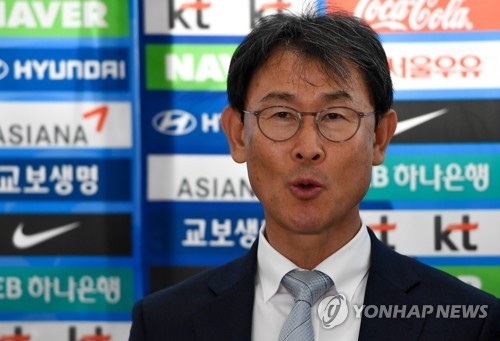 "North Korea have a higher FIFA ranking than we do, and they make big investments in women's football," the coach said. "But I think we've made good adjustments to their style of play. I think our players' confidence will be displayed well against the North Koreans."

The two Koreas will meet amid high tensions on the peninsula following speculation that Kim Jong-un's regime may soon conduct its sixth nuclear test. It will mark the first time the two will go head-to-head in a competitive football match in Pyongyang for either the men's or women's team.

Aside from political matters and the rivalry, South Korea will have to come out on top in North Korea if they want to go to the World Cup. Only the top nation will advance to the 2018 Women's Asian Cup, and the qualifying tournament will double as the first stage of the 2019 FIFA Women's World Cup in France.

"We have been giving our best efforts to beat North Korea," he said. "But we don't think that only the match against North Korea is special. We'll prepare for every match thoroughly."

The South Korean players have to deal with the distraction of playing at the 70,000-seat Kim Il-sung Stadium. But Yoon said they are prepared for such an environment. The players have practiced with loudspeakers playing the sound of Pyongyang's football supporters, so that they can adjust better when they actually perform on the North Korean pitch.

"I think our players will do fine," he said. "Since North Korean players make tireless runs, we focused on improving our stamina during training."

The South Korean women had a fine tune-up in Cyprus as they finished second at the Cyprus Cup tournament behind Switzerland earlier this month. North Korea finished third in the same tournament, but the two Koreas didn't meet at the eight-team invitational competition.

Yoon said he has been analyzing North Korea's matches at the Cyprus Cup. North Korea are expected to deploy the same players from the FIFA U-20 Women's World Cup championship squad from last December.

"I think North Korea's midfield and side backs lack experience, so we'll have to take advantage of that," he said. "We also need organized defense because we've always conceded goals from our mistakes." 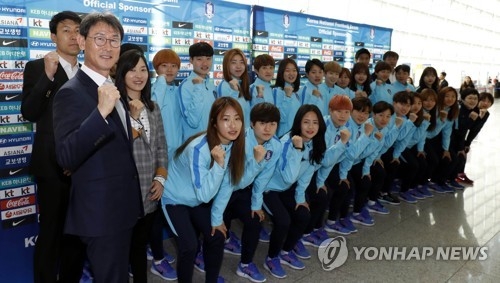