North Korea lost to Australia 2-1 to begin the International Ice Hockey Federation (IIHF) Women's World Championship Division II Group A at Gangneung Hockey Centre in Gangneung, Gangwon Province, some 230 kilometers east of Seoul. It blew a 1-0 first period lead, with Sharnita Crompton scoring the winner for Australia at 8:56 in the third. North Korea failed to score on seven power-play chances. 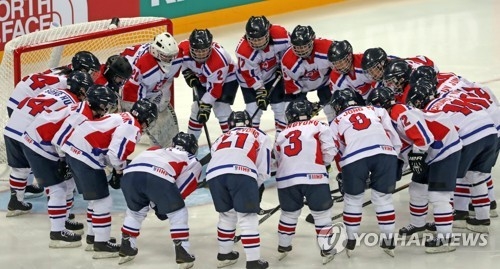 The loss, though, didn't dampen the mood in the stands for some 300 South Korean fans, who chanted messages like "We Are One!" and "Go Korea!" while banging thundersticks from start to finish. They waved the Korean Unification Flag, featuring the image of a whole Korean Peninsula in blue, while decked out in hooded sweatshirts with the same flag across their chest.

These fans are expected to attend all five North Korean games at the tournament, including a showdown against South Korea at 9 p.m. Thursday.

It will take place against the backdrop of tensions on the peninsula rising with Pyongyang's threat of a nuclear test. But after the game, diplomatic friction was put on the back burner, as the players lined up before the South Korean fans and lifted their sticks or took a bow in appreciation.

None of the 20 players spoke to the media after the loss, but Han Ho-chol, here as the North Korean team manager, thanked the supporters on their behalf.

The ongoing competition is doubling as a test event for the 2018 PyeongChang Winter Olympics. North Korea didn't qualify for women's hockey at PyeongChang but could still send athletes in other sports to compete south of the border.

The organizers of the PyeongChang Games have maintained that the doors are open for North Korea. Lee Hee-beom, head of the organizing committee, has repeatedly said any peace-loving nation, including North Korea, has a duty to participate in the Olympic Games. 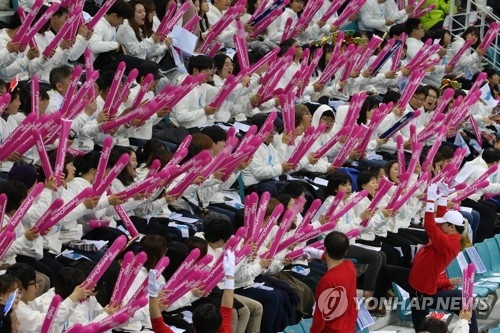