GANGNEUNG, South Korea, April 2 (Yonhap) -- North Korea on Sunday expressed its intent to take part in next year's Olympics in South Korea on the sidelines of the women's hockey world championships.

PyeongChang, some 180 kilometers east of Seoul in Gangwon Province, will host South Korea's first Winter Games next February. And Gangwon Province Gov. Choi Moon-soon said a Pyongyang sports official told him that North Korea will participate in the 2018 Winter Olympics. 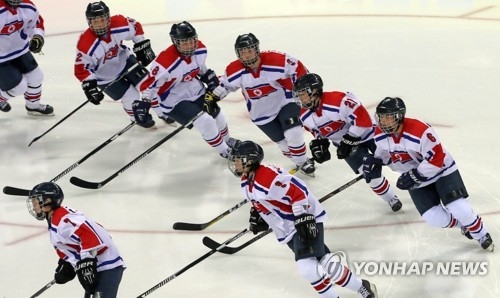 "When I asked him if North Korea will send athletes to PyeongChang, he said they will be here," Choi said, adding that the official was from the North Korean sports ministry.

As for the exact size of the delegation, the official told Choi that North Korea will try to send "as many athletes as possible" through qualifying events in different sports.

Choi said he proposed forming a joint cheering squad, and the official responded that he'll pass the idea along to the North Korean government.

North Korea opened the IIHF event with a 2-1 loss to Australia. The North will take on South Korea at 9 p.m. Thursday.

North Korea sent 20 players and 10 coaches and officials to Gangneung for the six-day tournament. Their much-anticipated hockey game will come on the eve of a women's football match in Pyongyang.

These sports games could help ease strained inter-Korean relations and exchanges sparked by North Korea's nuclear and missile programs, but the South Korean government, which approved the North Korean team's cross-border trip Wednesday, has downplayed the significance of the occasion.

The two Koreas are technically in a state of war since the 1950-53 Korean War ended in a truce, not a peace treaty.

North Korea played before some 300 South Korean supporters on Sunday. The players thanked the fans afterward with a bow and raising their sticks after the game.

Though none of the 20 players spoke to the media, Han Ho-chol, listed as a team manager, thanked the fans on their behalf. He kept mum on North Korea's Olympic participation, however, saying, "Let's wait and see."

The organizing committee for PyeongChang 2018 has maintained that the doors are open for North Korea, and that any peace-loving nation has a duty to participate in the Olympic Games.