SEOUL, April 2 (Yonhap) -- Prosecutors said Sunday they will question former President Park Geun-hye this week for the first time since her arrest over a corruption scandal that led to her removal from office.

Park was taken into custody on Friday after a court issued a warrant for her arrest. She faces charges of colluding with her friend Choi Soon-sil to extort money from conglomerates, including bribes from Samsung Group.

The former president will be questioned at her detention center south of Seoul on Tuesday, the prosecutors said. 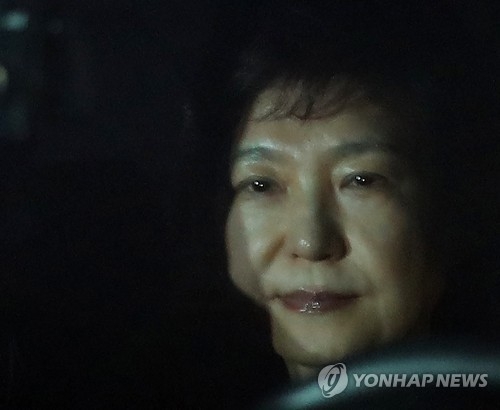 Park underwent a marathon questioning session last month after the Constitutional Court upheld her impeachment by parliament on March 10.

She has denied all wrongdoing and claimed no knowledge of Choi's alleged crimes.

The prosecutors said they initially planned to question her on Monday, but postponed the date after her lawyers requested more time to prepare. They had also asked her to come to their office, but the lawyers requested the questioning take place at the detention center in consideration of Park's mental condition and security issues.

Lee is suspected of giving or promising some 43.4 billion won (US$38.8 million) to Choi -- in effect to Park -- as kickbacks in return for business favors.

Both Choi and Lee are in custody.

Park is also accused of creating a blacklist to deny state support to cultural figures who were critical of her policies, and of pressuring conglomerates such as Hyundai Motor, POSCO and KT into signing contracts with Choi's firms.

The prosecutors are expected to level formal charges against Park by mid-April before the arrest warrant expires.

She is the third former president to be arrested over criminal allegations following Roh Tae-woo and Chun Doo-hwan.

(LEAD) Park to be questioned by prosecutors this week

(LEAD) Park to be questioned by prosecutors this week