SEOUL, April 2 (Yonhap) -- Ahn Cheol-soo of the People's Party won another primary Sunday to effectively clinch the nomination for the presidential election in May.

Ahn, a former leader of the centrist party, won the sixth primary covering Seoul and the nearby city of Incheon with 86.48 percent of the vote, party officials said.

He was trailed by former opposition leader Sohn Hak-kyu at 10.62 percent and Deputy National Assembly Speaker Park Joo-sun at 2.9 percent. 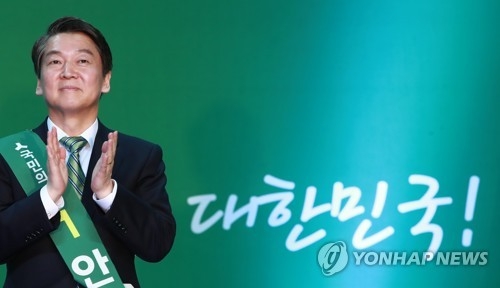 Ahn, who won all five previous rounds by a large margin, appears set to win his party's nomination after the final primary in Daejeon and the central Chungcheong provinces on Tuesday.

"We will open a new future through a better change of administration centered on the People's Party," a spokesman for Ahn said in a statement. "We will win no matter what to usher in a better tomorrow for the Republic of Korea as well as for reform, integration and the people."

The former software mogul has recently emerged as a possibly formidable opponent to front-runner Moon Jae-in of the liberal Democratic Party.

An opinion poll conducted by the Korea Society Opinion Institute on Friday and Saturday showed Ahn more than doubling his approval rating to 22.3 percent. He ranked second after Moon, who garnered 34.6 percent.

The other main contenders in the May 9 election are South Gyeongsang Province Gov. Hong Joon-pyo of the conservative Liberty Korea Party and Rep. Yoo Seong-min of the Bareun Party.

The Bareun Party broke away from the then-ruling Liberty Korea Party in the wake of parliament's impeachment of then-President Park Geun-hye in December.

The election is being held seven months earlier than scheduled due to Park's removal from office over a corruption scandal.