SEOUL, April 2 (Yonhap) -- The presidential nominee of the leading conservative party on Sunday rejected the notion of forming a political alliance with a centrist party to challenge liberal front-runner Moon Jae-in.

Hong Joon-pyo, governor of South Gyeongsang Province and presidential nominee of the Liberty Korea Party, made the remark in an interview with Yonhap News Agency in response to a question about the possibility of joining forces with smaller parties including the centrist People's Party. 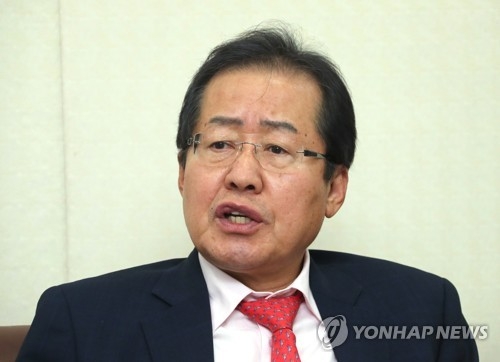 "I can't band together with the People's Party," he said at his party's headquarters two days after winning the nomination. "I've become the legitimate candidate (of the conservative camp), and there is no chance a legitimate candidate will form a coalition with another party and resign midway."

The firebrand politician argued, however, that the splinter Bareun Party should return to the Liberty Korea Party. Bareun broke away from the then-ruling Liberty Korea Party in the wake of then-President Park Geun-hye's impeachment in December.

"The reason (for the split) was the impeachment, and now that that's done, isn't the justification gone too?" he said. "In the end, we have to go together."

Hong's remarks come as Moon of the liberal Democratic Party has maintained a firm lead in opinion polls with an approval rating of over 30 percent.

Ahn Cheol-soo of the People's Party has recently risen to No. 2, beating other contenders from the largest Democratic Party, while Hong has often placed fifth with under 10 percent.

The governor sought to distance himself from the failed administration of former President Park, saying he had no part in her government and concentrated only on his gubernatorial duties.

Hong argued that he would be launching an administration, not re-launching one, if elected in the May 9 poll.