Forwards Choi Ji-yeon and Jo Su-sie each had a goal and an assist for the winning start at the International Ice Hockey Federation (IIHF) Women's World Championship Division II Group A at Kwandong Hockey Centre in Gangneung, Gangwon Province.

The arena is one of two competition venues, along with Gangneung Hockey Centre, in the city located some 230 kilometers east of Seoul. The tournament is also a test event for the 2018 PyeongChang Winter Olympics.

The tournament also features the Netherlands (No. 19), Britain (No. 21), North Korea (No. 26) and Australia (No. 28). The top nation after the round-robin play will be promoted to Division I Group B next year, while the last-place nation will be relegated to Division II Group B in 2018. 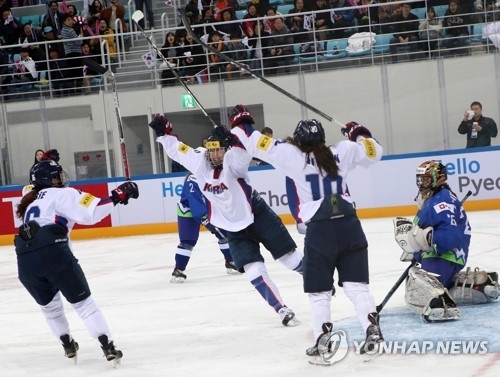 South Korea got on the board first at 4:36 in the opening frame, taking advantage of a Slovenian defensive breakdown.

Slovenia tied the score about four minutes later, and it was the South Korean defense that suffered a fatal lapse.

After Slovenia lobbed one toward the net, goalie Han Do-hee, normally a backup who got the starting nod over Shin So-jung, couldn't quite corral the loose puck in a mad scramble around her. Eva Dukaric was then left all alone at the top of the crease to poke home the rebound.

South Korea outshot Slovenia 29-7 in the first 20 minutes, and the host kept the pedal to the metal in the second period.

The efforts paid off in the form of the go-ahead goal by Jo Su-sie at 7:06. After staying in the offensive zone for a long stretch, Eom Su-yeon floated a shot from the right point, and Jo deftly deflected the puck into the net.

South Korea extended the lead with a power-play goal at 11:24 by Choi Ji-yeon, who banged home the rebound after Marissa Brandt's point shot. 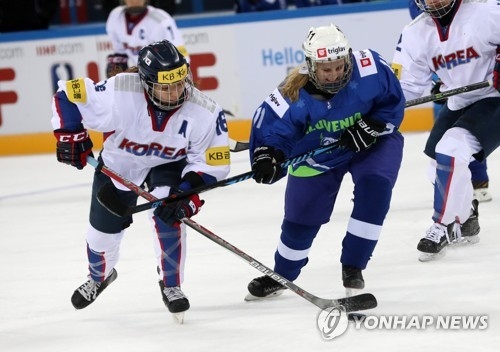 Danelle Im -- a Toronto native with Korean parents -- then made it 4-1 at 7:32 in the third on a breakaway, taking a nifty pass from Randi Griffin, born in the United States to a Korean mother and an American father.

Im and Griffin are among the foreign-born players of Korean descent that the government here has fast-tracked to South Korean citizenships, hoping to boost the national team's competitiveness ahead of the 2018 Winter Olympics on home ice. South Korea has received an automatic berth as the host nation.

First-line forward Park Jong-ah followed up by scoring on a rebound off a Park Chae-lin shot at 9:09, putting South Korea up 5-1.

South Korea had a youthful squad of eight teenagers among 22 players, and every player except injured forward Caroline Park returned from the squad that finished fourth at the Sapporo Asian Winter Games in February. It was the country's best performance at the continental event.

South Korea's next game is against Britain at 9 p.m. Monday.