After getting the first goal at 4:36, South Korea allowed Slovenia to tie the score less than four minutes later. The defense broke down in a puck battle deep in the defensive zone, and with goalie Han Do-hee unable to corral the loose puck, Eva Dukaric scored the tying goal.

South Korea poured in four unanswered goals but Murray said her players need to bear down more on defense.

"I think in our minds, we thought the game was going to be easy," she said. "Last year, when we played against Slovenia (at the world championships), they didn't get into our defensive zone very much at all. I think today we were very offensively minded and not exactly prepared to play the defensive zone. We're going to do a lot of video (Monday) to make sure we don't have any lapses like that again." 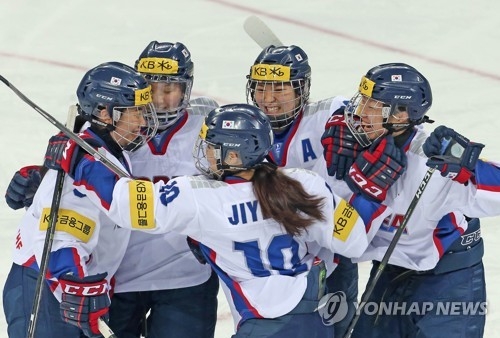 Despite that miscue, South Korea overwhelmed the undermanned Slovenia, whose players only landed here Saturday night. Three of the players were healthy scratches because their equipment didn't arrive with them, forcing coach Franc Ferjanic to play only 15 skaters.

Murray coached South Korea to fourth place at the Sapporo Asian Winter Games in February, the country's best showing at the continental event. In the month and a half since then, Murray said the players had tried to improve their endurance.

"We definitely cranked up the players' conditioning, and our new strength coach has been doing a really great job pushing the players," Murray said. "Systematically, things that we had problems with in the Asian Games, we've been fine-tuning and trying to improve."

The tournament also features the Netherlands (No. 19), Britain (No. 21), North Korea (No. 26) and Australia (No. 28). The top nation after the round-robin play will be promoted to Division I Group B next year, while the last-place nation will be relegated to Division II Group B in 2018.

South Korea's next game is against Britain at 9 p.m. Monday, but the one that many here are waiting for is the showdown against North Korea on Thursday.

Ranked 26th, North Korea fell to No. 28 Australia 2-1 earlier Sunday. North Korea gave a lethargic effort on both ends, and South Korea, which beat the North 4-1 at last year's worlds, should have little trouble beating the country again this week.

Still, Murray said the team isn't looking any further down the road than Monday's game.

"It'll be an exciting game but we've learned from past experience that we can't look ahead," she said. "In these round-robin tournaments, every game is important. We're hoping that we're going to get lots of fans (on Thursday). But right now, our sole focus is on Britain."