WASHINGTON, April 2 (Yonhap) -- U.S. President Donald Trump said the United States will tackle North Korea on its own if China refuses to use its leverage and rein in the communist neighbor, according to an interview published Sunday.

Trump didn't elaborate on how he will deal with the North without Chinese help. But the remark, made in an interview with the Financial Times, was seen as a veiled warning to Beijing that it would be bad for Chinese interests if the U.S. starts taking unilateral action.

The warning came just days before Trump holds his first talks with Chinese President Xi Jinping on Thursday and Friday at his Mar-a-Lago resort in Florida. North Korea is expected to be one of the biggest topics for their discussions.

"China has great influence over North Korea. And China will either decide to help us with North Korea, or they won't," Trump said during the interview in the Oval Office, according to the Financial Times. "If they do, that will be very good for China, and if they don't, it won't be good for anyone."

Asked if he would consider a "grand bargain" -- where China pressures Pyongyang in exchange for a guarantee that the U.S. would later remove troops from the Korean Peninsula -- Trump said: "Well, if China is not going to solve North Korea, we will. That is all I am telling you," according to the paper.

Trump was also quoted as saying it was "totally" possible for the U.S. to tackle North Korea without Chinese help. Asked if that meant dealing with Pyongyang one-on-one, he said: "I don't have to say any more. Totally," according to the paper.

As to how to deal with North Korea, U.S. Secretary of State Rex Tillerson said, during his trip to South Korea, Japan and China last month, that two decades of diplomatic efforts failed to disarm the North and the U.S. was looking at a range of options, including the use of military force. 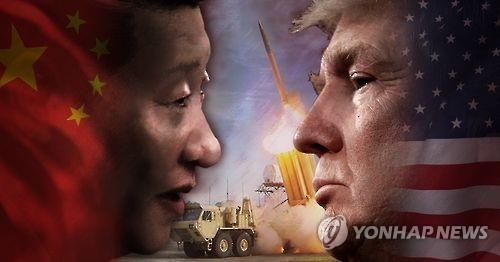 Trump has made it a key priority of his administration to pressure China to exercise more leverage over Pyongyang as the main provider of food and energy for the impoverished nation. Trump has said that the Chinese can solve the problem "very easily if they want to."

China has been reluctant to use its influence over Pyongyang for fear that pushing the regime too hard could result in instability in the North and even its collapse that could lead to the emergence of a pro-U.S. nation next door.

Concerns about North Korean nuclear and missile threats have deepened in the U.S. since North Korean leader Kim Jong-un threatened in his New Year's Day address that the country is ready to test-fire an intercontinental ballistic missile apparently capable of reaching the U.S.

"There is a real possibility that North Korea will be able to hit the U.S. with a nuclear-armed missile by the end of the first Trump term," KT McFarland, deputy White House national security adviser, was quoted as telling the Financial Times in a separate interview.

The paper has also reported, citing unidentified officials, that the National Security Council has completed a review of options on North Korea, and the review had been accelerated to have the options ready for the Trump-Xi summit.

Trump says U.S. will tackle N. Korea on its own unless China reins in Pyongyang

Trump says U.S. will tackle N. Korea on its own unless China reins in Pyongyang