SEOUL, April 3 (Yonhap) -- The liberal Democratic Party of Korea was set to hold the last round of its primary election Monday to name its candidate in the upcoming presidential election.

The one-day voting was to begin at 2 p.m., covering the Gangwon and Jeju provinces, as well as the capital region that includes Seoul and the western port city of Incheon.

Whether a presidential candidate will be named at the end of the fourth and last round of the primary election remains to be seen as a successful contender needs to win more than half of all votes for party nomination in the May 9 election.

After the first three rounds of the primary, former party chief Moon Jae-in had 59 percent of all votes cast. 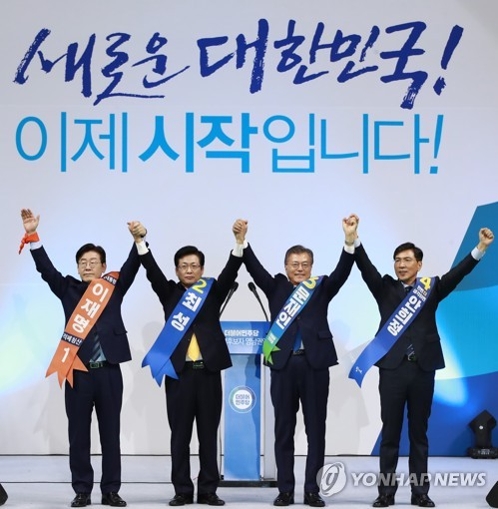 However, Monday's vote was expected to involve more votes than the first three rounds combined. Seoul and its surrounding region alone are home to nearly half of the country's 51 million population.

The entire primary election was expected to involve some 2.1 million voters, with about 55 percent of them expected to take part in Monday's voting.

"We are still not in a position to feel easy because the proportion of votes in the capital region is so large," Moon has said.

He is followed by South Chungcheong Province Gov. An Hee-jung, who at the end of the first three rounds had 22.6 percent of the votes.

Should Moon or other contenders not be able to secure a majority of votes, a run-off election will be held until Saturday, in which case those currently trailing could join forces to challenge the front-runner.

Earlier reports have suggested the presidential front-runner will need at least 45 percent of votes cast Monday to win the in-house race.

Democratic Party to hold last round of party primary

Democratic Party to hold last round of party primary