SEJONG, April 3 (Yonhap) -- Large conglomerates are accounting for less of the nation's exports, their percentage falling to the lowest mark in eight years in 2016, statistics showed Monday.

Exports by conglomerates in 2016 totaled US$308.5 billion, equal to 62.3 percent of South Korea's entire exports for the year, according to the Trade Statistics Service. The latest figure is the lowest since the 62 percent recorded in 2008, and it compares with 67.8 percent in 2012, after which the figures have fallen continuously. 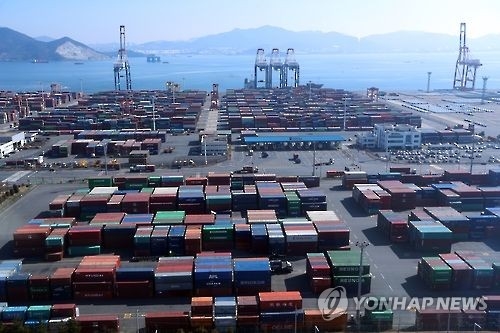 In theory, the reduced portion for big companies could be a good sign that the country's trade is less concentrated in large conglomerates. But economists say the phenomenon has more to do with a slowdown in their exports than with such readjustments.

"Our industrial structure itself is slanted toward conglomerates. If they suffer, then the country's economy suffers," he said.

Statistics from the trade ministry showed that South Korea's exports of the main items, covering semiconductors, petroleum products, automobiles, ships and machines, fell by 7.7 percent last year from the year before. For petroleum products, flat display and home appliances, the exports fall was in double digits.

Exports by conglomerates accounting for growingly less of nation's total

Exports by conglomerates accounting for growingly less of nation's total