SEOUL, April 3 (Yonhap) -- Moon Jae-in, the presidential nominee of the liberal Democratic Party, often comes across as an activist rather than statesman.

Despite serving nearly 10 years in the top echelons of government and party politics, his image is removed from backroom deals, authoritarian arrogance and sordid ties with businesses, which often characterize Korean political leaders.

As a former radical activist and chief aide to a liberal president, however, he faces conservatives' suspicions about his credentials as a leader to steer the nation through daunting challenges of economic slowdown and North Korean threats.

Moon was nominated Monday as the presidential candidate of the nation's largest party after sweeping the four rounds of the primary for the past eight days. 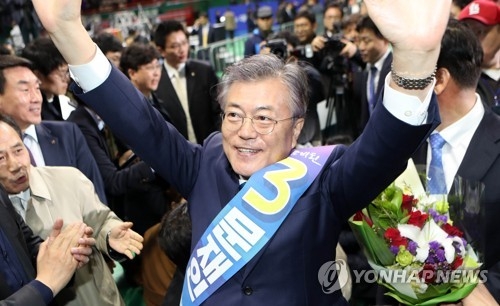 The former pro-democracy activist and human rights lawyer is the most favored to win the May 9 presidential election. The latest poll released Monday put Moon on top among all presidential hopefuls, with a 34.9 percent approval rating, nearly double the 18.7 percent secured by runner-up Ahn Cheol-soo of the centrist People's Party.

Born to a poor family in Geoje, a small island located some 420 kilometers south of Seoul in South Gyeongsang Province, the 64-year-old made his debut in the public arena in 2002 as a key campaigner for then-presidential candidate Roh Moo-hyun.

After spending nearly four years in the wilderness, he entered politics in 2012, when he was elected to the National Assembly in Busan, the country's second-largest city, which is closely located to his hometown but considered a traditional stronghold of conservatives.

He later went on to represent the then main opposition Democratic United Party in the 2012 presidential election. He lost to Park Geun-hye of the then ruling Saenuri Party, which, following her impeachment in December, split into the Liberty Korea Party and the Bareun Party.

In his second shot at the presidency, Moon is set to face opponents from both conservative parties -- Hong Joon-pyo of the Liberty Korea Party and Yoo Seong-min of the Bareun Party.

Despite what many observers here call his comfortable lead in recent presidential polls, the former chief of the Democratic Party faces many obstacles in his path to the top government position.

Moon is known to have spent most of his college years at the front lines of a student movement against the dictatorship of then-President Park Chung-hee, who is the late father of the recently ousted president.

He was arrested in 1975 and in 1980 for staging pro-democracy demonstrations.

However, his past career apparently continues to provide a source of attacks to this date by his conservative opponents, who often portray the presidential front-runner as a radical and a "commie."

His push for reconciliation with North Korea and reluctance to criticize its human rights violations are often criticized by right-wing politicians as appeasement.

Those close to Moon note he spent much of his life as a fighter, but that he fought for the have-nots and the socially weak, whose well-being should be the priority for the next government as the growing social and economic inequality undermines the nation's future growth and social integration.

For nearly two decades before joining politics, Moon worked together with the late President Roh as a human rights lawyer.

Moon graduated from Seoul's Kyunghee University and passed the state bar exam in 1980. He is married with one son and a daughter.

(Profile) Moon Jae-in, an activist and strong advocate for the poor

(Profile) Moon Jae-in, an activist and strong advocate for the poor