The three-day training was kicked off in the waters between South Korea and Japan near Jeju Island, involving an Aegis system-equipped guided missile destroyer, several other warships and military choppers, according to the Ministry of National Defense. 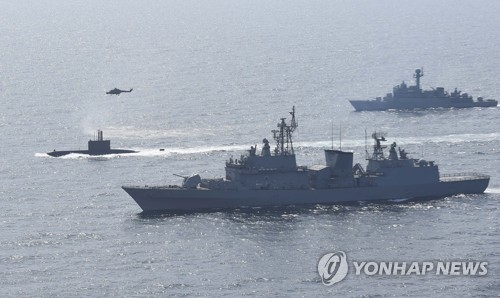 The secretive nation is seen as trying to miniaturize nuclear bombs to fit into its missiles. SLBMs have emerged as a key concern for the South's troops working to establish the Korean Air and Missile Defense (KAMD) system.

The South's arms procurement agency said it's pushing for the purchase of early warning radars in addition to the two Green Pine land-based radars in operation.

"The existing radars are meant mainly to detect ground-launched missiles," a defense official said. "Additional radars are necessary to counter attacks from the enemy's submarines in the West Sea and East Sea."

The Defense Acquisition Program Administration (DAPA) is also considering leasing a military spy satellite from Israel, France or Germany, according to defense sources.

Japan's media reported earlier that Tokyo and Washington had made an offer for such a joint anti-submarine training shortly after the deal but Seoul turned it down.

The report triggered speculation that South Korea made the reported decision in consideration of relations with China.

But South Korean officials said it was just a matter of timing, not because of Seoul's rejection.

Seoul and Tokyo have been in a renewed diplomatic stand-off for months over the installation by civic activists of a girl statute in front of Japan's diplomatic mission in Busan to commemorate Korean women forced to serve as sex slaves for Japanese troops during World War II.

In January, Japan recalled its ambassador from Seoul over the incident. He has yet to return.