South Korean footballers landed in Pyongyang to take part in the Asian Football Confederation (AFC) Women's Asian Cup Group B qualifying tournament. All Group B matches are played at Kim Il-sung Stadium in the North Korean capital until April 11.

This is the first time that a South Korean team has visited Pyongyang for a football match since October 1990, when the men's squad played against North Koreans in a friendly event. The women's team head coach Yoon Duk-yeo was a member of the men's team in the 1990 friendly, in which the South fell 2-1 to the North.

South Korea will open the Women's Asian Cup qualifying stage with India on Wednesday, followed by the much-anticipated all-Korean showdown Friday. The women's team will then face Hong Kong on Sunday and will wrap up the qualification with Uzbekistan two days later.

"It feels like the event has begun in earnest. It's an important contest so I want to deliver a good performance by concentrating on the game," forward Ji So-yun, star of Chelsea Ladies FC, told pool reporters after arriving at the Sunan International Airport in Pyongyang.

Midfielder Lee Min-a also promised to produce good results by saying, "I personally would like to score goals but want to lend a hand to our national team to win."

Any trip to the North requires the South's approval, as well as the North's consent, as the two Koreas have technically remained in a state of war since the 1950-53 Korean War ended in a truce, not a peace treaty. The Seoul government last week approved the football team's visit to Pyongyang after the North assured the safety of the South Koreans via the AFC.

Fifty-one South Koreans, including reporters, will stay in Pyongyang during the qualifying tournament. They flew from Seoul to China on Sunday to obtain visas at the North Korean Embassy in Beijing before taking flights to Sunan International Airport in Pyongyang.

The women's team aims to come out on top in North Korea, with only the group winner advancing to the 2018 Women's Asian Cup in Jordan. The eight-team Asian Cup also doubles as the qualifying tournament for the 2019 FIFA Women's World Cup in France, meaning that if South Korea can't finish atop the group in Pyongyang, they are automatically out of the women's showpiece event as well.

The South Korean women will officially begin their first training at Kim Il-sung Stadium on Tuesday. 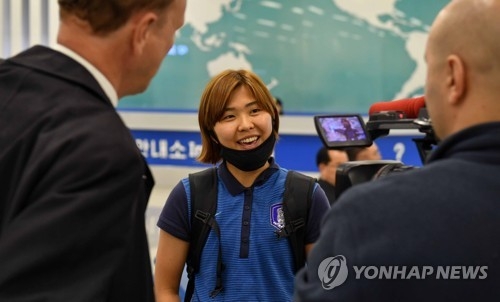