SEOUL, April 3 (Yonhap) -- Presidential front-runner Moon Jae-in of the liberal Democratic Party maintained his lead for the 13th consecutive week but faces a growing challenge from a longtime rival who closed in to rank second, a poll indicated Monday.

Moon, a former leader of the largest party in parliament, garnered 34.9 percent in the survey conducted from Monday to Friday last week, up 0.5 percentage point from the previous week, Realmeter said. 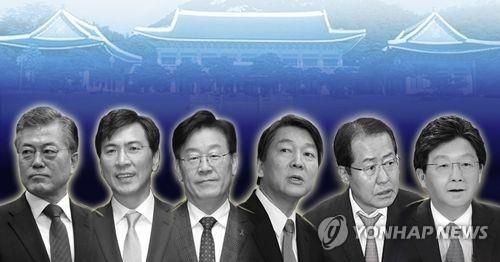 An ranked third after falling 5 percentage points to 12.1 percent.

"(Ahn), who received the media's intense spotlight with his primary wins in Honam, Yeongnam and Gyeonggi, absorbed most of those supporters of Gov. An Hee-jung who deserted him," Realmeter said.

Ahn has swept all six of his party's primaries and appears set to clinch the nomination Tuesday following the final round covering the central city of Daejeon and the surrounding Chungcheong provinces.

Moon has also effectively secured his party's nomination with the result due to be announced later in the day.

Other contenders in the May 9 poll include Seongnam Mayor Lee Jae-myung of the Democratic Party, who ranked fourth at 10 percent, followed by South Gyeongsang Province Gov. Hong Joon-pyo of the conservative Liberty Korea Party at 7.5 percent.

In a hypothetical five-way race, Moon posted 43 percent against Ahn's 22.7 percent, Hong's 10.2 percent, and 3.9 percent for both Yoo Seong-min of the splinter conservative Bareun Party and Sim Sang-jung of the minor progressive Justice Party.

A hypothetical three-way race involving Moon, Ahn and Hong also showed Moon in the lead with 47.1 percent against Ahn's 26.3 percent and Hong's 11.9 percent.

The survey was conducted on 2,550 adults nationwide and had a margin of error of 1.9 percentage points at the 95 percent confidence level.