MOKPO, South Korea, April 3 (Yonhap) -- Nearly 80 items presumed to belong to those that were on the ill-fated Sewol ferry have been retrieved from the wreck that has been brought to the port of Mokpo, the government said Monday.

Salvage operators raised the 6,800-ton Sewol ferry and placed it on a semisubmersible ship last month, nearly three years after the vessel sank off the country's southwestern coast near Jindo Island in April 2014.

Since the Sewol arrived at Mokpo on Friday, operators have been draining water and mud from the hull in order to reduce weight before putting it in a dry dock around Thursday.

The Ministry of Oceans and Fisheries said it has collected 79 items, including clothes, mobile phones, ties and shoes, during the drainage work.

It said the owners of the items retrieved have yet to be identified.

On Sunday, nine bone fragments, along with a passport and other personal belongings, were discovered on the deck of the submersible ship carrying the Sewol, but on-site inspectors determined the bones were from animals.

The government said a massive search at the site where the Sewol ferry sank has started with the aim of finding the remains of those still missing and other clues that can shed more light on why the ship sank.

The Sewol is expected to be moved to land on Thursday using module transporters, according to the government. 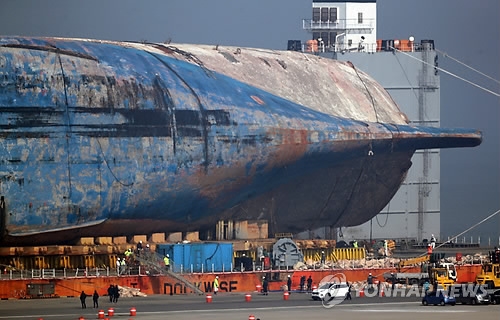