This was Ryu's fourth LPGA victory and her second major following the 2011 U.S. Women's Open title. Ryu's last tour victory had come in August 2014 at the Canadian Pacific Women's Open.

Ryu began the final day one stroke behind the leader Suzann Pettersen at 10-under and put together a bogey-free round of four-under 68 on Sunday, closing out her day with a birdie to finish the regulation at 14-under 274. It was Ryu's fourth consecutive round in the 60s.

Ryu, world No. 3, became the fifth different South Korean winner in seven events on the LPGA Tour this season.

The 26-year-old has been the tour's best player without a win in 2017. She came into ANA Inspiration as the money leader with US$387,166 and the scoring leader at 67.938 strokes per round. She didn't miss a top 10 in her four previous starts this season.

The South Korean also caught a break during the final round, when Thompson, leading by three with six holes to play, was assessed a four-stroke penalty for making an incorrect ball placement the previous round.

A television viewer alerted officials that Thompson marked her ball and then put it back closer to the hole before her putt on the 17th green in the third round. The tour only decided on the penalty during the final round, penalizing Thompson for two strokes for an incorrect placement and two more for an incorrect scorecard.

She stared down an eagle putt at the par-five 18th that would have clinched the title but left her attempt just inches short to set up a playoff with Ryu.

They went back to the 497-yard 18th, and it was Ryu who rose to the occasion by sinking a nervy birdie putt. 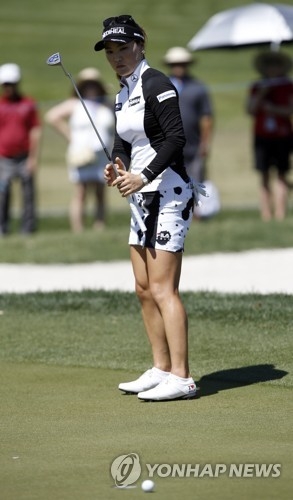