South Korea will host the FIFA U-20 World Cup from May 20 to June 11 in six cities. The young Taeguk Warriors are in Group A with Argentina, England and Guinea.

The 25 players, including FC Barcelona prospects Lee Seung-woo and Paik Seung-ho, will assemble next Monday at the National Football Center in Paju, north of Seoul, to begin preparations for the U-20 World Cup. Shin needs to submit the 21-man final entry list to FIFA by May 8.

Shin, who took the helm last November, said he will pick the final members for the U-20 World Cup from the 25-man provisional squad unless unexpected situations, such as injuries, occur over the course of their preparations. For the U-20 World Cup, the teams can actually file a 35-player preliminary roster with FIFA, and the replacement players must come from that list.

"It's possible to pick the players who are not on this list if some of them are injured," Shin said during a press conference at the Korea Football Association (KFA) headquarters in Seoul. "But I hope that situation does not happen." 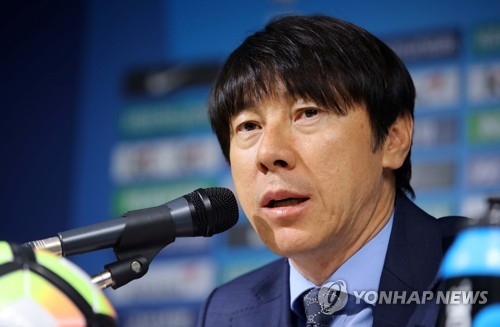 On the 25-man list, 11 of them play with professional teams, while the rest are with college football clubs. Pohang Steelers defender Woo Chan-yang has the most caps with 27 matches, while Kang Ji-hun of Yongin University has scored the most goals for the U-20 side with 11 in 26 matches.

Shin said he selected the 25 players after checking them through a monthlong training camp in Portugal earlier this year and a U-20 World Cup test event last month.

Shin's side won the four-nation U-20 football tournament at home in March over Honduras, Zambia and Ecuador. All three nations are also participants in the U-20 World Cup. Six players who took part in the tournament, including 17-year-old goalkeeper Choi Minh-soo of the VfB Stuttgart youth team, failed to make the cut Monday.

"I couldn't really make an evaluation of our team until the four-nation tournament," he said. "But after the tournament, I realized that our team is competitive enough to take on the teams at the World Cup."

Shin, who coached South Korea at the 2016 Rio de Janeiro Summer Olympics, said those who can play in multiple positions will likely get the nod for the 21-man team.

"I now have a grasp on the characteristics of my players," he said. "I want to pick players who understand my style of football." 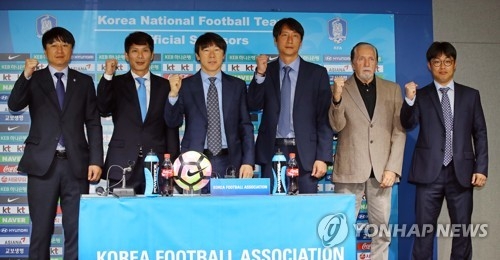 On the 25-man list, Shin included defender Jeong Tae-wook, who fell to the ground unconsciousness last week after a collision with a Zambian player at the four-nation tournament. Jeong was later diagnosed with a fractured neck, which will rule him out for four to six weeks, but Shin said the center back will be available for the U-20 World Cup.

"He will be able to train with us, although we have to protect his neck carefully," Shin said. "We believe he will gain fitness before we play our first match on May 20."

Shin said his team will first focus on building up stamina in their training this month before starting tactical practices. South Korea also plan to have two friendly matches in May before the World Cup.

"We plan to have friendly matches on May 11 and May 14 with those who are competing at the World Cup," he said. "Our opponents will be the teams that finished at least second in their regional qualifications."

Following the senior national football team's recent mediocre performances in the 2018 FIFA World Cup qualifying campaign, Shin was tabbed by some fans to succeed Uli Stielike, but the 46-year-old South Korean emphasized that his main focus is on leading the U-20 squad.

"I only think about the U-20 World Cup at this point," he said. "I know South Korean football is having a difficult time right now, but I believe we'll be able to get through."