The accumulated mortgages rolled out by six major lenders -- KB Kookmin Bank, Shinhan Bank, Woori Bank, KEB Hana Bank, NH Bank and the Industrial Bank of Korea -- stood at 378.06 trillion won (US$339 billion) in March, up 211.7 billion won from a month earlier, according to official data.

The increase came as the number of home sales went up. The number of home transactions involving apartment units came to 6,359 in March, up 36.1 percent from a month earlier, according to data compiled by the Seoul metropolitan government.

The move came as South Korea's financial regulator asked capital financing firms and leasing companies to refrain from increasing their household loans as part of its efforts to curb the growth of household debt.

The country's outstanding household credit -- which is composed of household loans and credit card spending -- came to 1,344.3 trillion won at the end of 2016, up 11.7 percent from a year earlier.

South Korea's household debt has been cited as one of the key vulnerabilities facing Asia's fourth-largest economy. 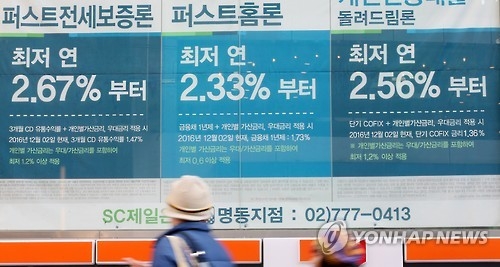 Mortgage loans edge up in March on increased home transactions

Mortgage loans edge up in March on increased home transactions