SEOUL, April 3 (Yonhap) -- A Saudi Arabian newspaper has selected Hyundai Motor Co.'s flagship G90 sedan as the most luxurious sedan for this year in the Middle Eastern country, the company said Monday.

"The selection will help us promote the Genesis sedan's brand image and increase sales in the oil-rich market," a company spokesman said.

The G90 sedan, also known as the EQ900 in South Korea, has been picked as the most luxurious sedan for this year in Saudi Arabia by Okaz, an Arabic Saudi Arabian daily newspaper based in Jeddah, Hyundai said in a statement.

Hyundai began selling the flagship model in Saudi Arabia and other Middle Eastern markets in October. The G90 model comes in three trims, equipped with a 3.3-liter turbo, a 3.8-liter gasoline or a 5-liter gasoline engine, in the markets, the company said in a statement.

Since its launch in December 2015 as an independent brand under the wing of Hyundai Motor, a total of 27,543 G90 sedans have been sold in the United States and other overseas markets. For the whole of 2016, Hyundai sold a combined 658,642 Genesis sedans in the domestic market, according to the company.

Hyundai plans to launch the G70 sedan later this year to beef up its luxury Genesis brand.

The addition of the G70 to the current Genesis lineup composed of the G80 and the G90 sedans will also help strengthen its brand image overseas, the spokesman said. 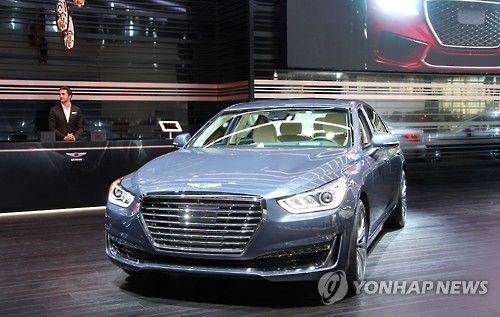