The Rodong Sinmun, the country's main newspaper, cited the 105th birthday of Kim Il-sung, which falls on April 15, and the 85th anniversary of the creation of the Korean People's Army on April 25.

"The meaningful April holidays should be marked as big political festive events that can be remembered in the national history," the newspaper said.

North Korea usually holds big military events or parades at anniversaries whose final numbers end in a five or a zero. The North's April calendar is full of such anniversaries.

North Korea is believed to be preparing for a massive military parade at Mirim Airport in Pyongyang in a bid to show off its military prowess at the military's founding anniversary.

"The military parade may be held on April 25 to display its military power," a government source said. 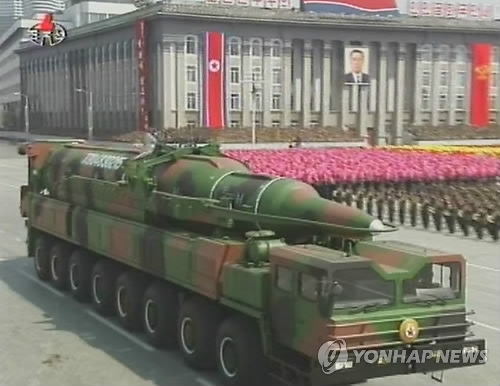 The country's last military parade, the largest ever, was held Oct. 10, 2015, the 70th founding anniversary of the ruling Workers' Party of Korea.

But there is a possibility that the North could hold the parade on the birthday of Kim Il-sung, the grandfather of the current leader Kim Jong-un.

North Korea unveiled its intercontinental ballistic missile known as the KN-08 for the first time in its military parade to mark the 100th birthday of the founder in 2012.

"We are calling on North Korea to refrain from making provocative acts and (make efforts) for the improvement of inter-Korean ties," Lee Duk-haeng, ministry spokesman, told a regular press briefing.

North Korea will mark the fifth anniversary of the current leader being elected the first secretary of the National Defense Commission on April 13. Kim Jong-un assumed power in late 2011 following the sudden death of his father.

The date is also the 25th anniversary of Kim Il-sung being awarded the title of grand marshal. 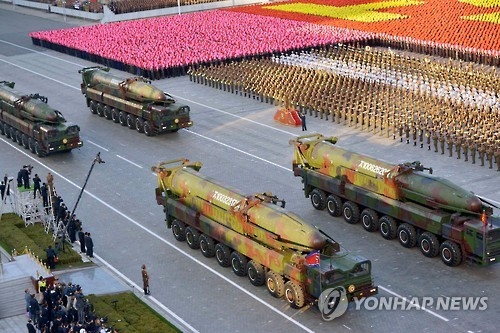