SEOUL, April 3 (Yonhap) -- North Korea has named a military academy that trains commanding officers for guards after Ri Ul-sol, a late senior politician and military official known as a messenger of the late founder Kim Il-sung, according to footage from a North Korean broadcasting program aired Monday.

In the program of the North's Korean Central TV on highlighting the personal cult of the North's current top leader Kim Jong-un, a soldier was seen holding a flag of the Ri Ul-sol Guard General Service Military Academy, tasked with producing officers that work for the Command of Guard, which protects the North Korean leader.

The North Korean Army is known to have more than 20 institutions or schools rearing military officers, with every branch of the army possessing a respective military school. The Command of Guard is no exception.

In the footage, Kim Jong-un was spotted attending the funeral for Ri, who died in 2015, and giving some sort of instructions to senior military officials before the soldier bearing the academy's flag appeared.

Ri Ul-sol, a former marshal of the North Korean Army, was also the commander of the guard responsible for the protection of high-ranking Korean officials, including the ruling Kim family.

He was a guerrilla fighter during the nation's fight for independence from Japan and later worked together with North Korea's founder Kim Il-sung as his messenger and for Kim Jong-il, father of the current leader. 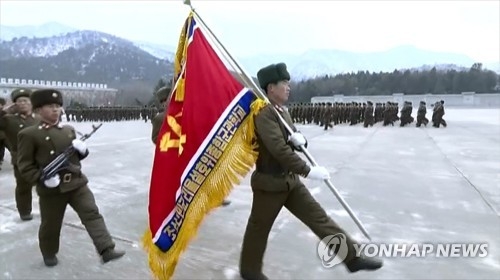 The North is believed to have named the academy after Ri after his death. He served as the commander of the guard for 30 years until 2004, when he retired.

It is not rare that major military universities or academies are named after the Kim family or people who were close to the late founder.