SEOUL, April 3 (Yonhap) -- South Korea's liberal Democratic Party on Monday renewed its call for a parliamentary inspection of the ongoing deployment of a U.S. missile defense system, raising suspicion that the government may have pressured a local company to agree to offer land to host the missile shield unit.

The largest political party's special committee on the issue insisted Lotte Group's decision to provide its 18-hole golf club in Seongju, 300 kilometers southeast of Seoul, was made under government pressure, if not coercion. 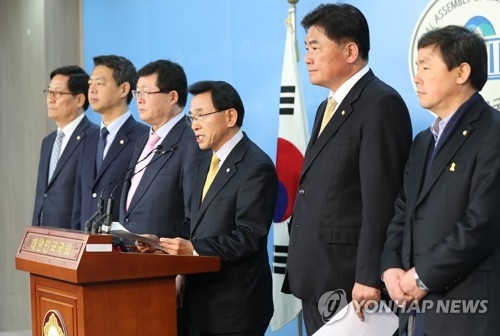 The accusation came about 10 days after Lotte Chairman Shin Dong-bin was quoted as saying that his group had little or no choice in an interview with The Wall Street Journal, published March 24.

"If the government asks a private corporation like ours to give up the land, then I don't think we have the luxury of rejecting the government," Shin was reported as saying.

The nation's fifth-largest business group approved the land-swap deal for the Terminal High Altitude Area Defense (THAAD) battery during a board meeting in late February. The retail giant was given a piece of land previously owned by the defense ministry just outside of the capital Seoul that is equal or greater in value.

Shin's remarks had also been viewed as an appeal to Chinese consumers in the wake of an apparent retaliation from the Chinese government.

Since the land deal, dozens of Lotte grocery shops and department stores in China have been shut down for various reasons, including fire hazards.

"I love that country. We definitely want to continue our business in China," Shin told the U.S. newspaper.

Still, the Democratic Party raised questions whether the government had coerced the business conglomerate to go against its own interest and will.

"Isn't Lotte under the same kind of pressure former President Park Geun-hye and Choi Soon-sil applied on large conglomerates to set up the Mir and K-sport foundations?" it asked, referring to the corruption scandal that led to the March 10 removal of the former president.

Both Park and her friend Choi have been arrested, partly on suspicions of collecting nearly 80 billion won (US$71.8 million) from dozens of local businesses through coercion.

"It has been revealed that the government pressured private firm Lotte to give up its land despite a well-anticipated deterioration in its relations with China, and Lotte could not reject such a demand despite a massive loss," the committee said in a released statement.

The liberal party has been urging the government to have the THAAD deployment ratified by the National Assembly.

The Democratic Party currently controls 120 seats in the 299-seat unicameral parliament, the largest number for any single party.

Its likely candidate Moon Jae-in also leads the ongoing race for the May 9 presidential election, with the latest poll placing him on top for the 14th consecutive week with a 35.4 percent approval rating.