"The duty-free business, the mainstay of Hotel Lotte, is under serious strains due to Chinese measures. So it is hard to comment on its IPO or anything to do with the company's plan on the transition to the holding-company structure," Hwang Kag-gyu, head of the Corporate Innovation Office, told reporters.

His remarks come amid a swirl of turmoil that has engulfed the group at home and abroad in recent months. Its duty-free business is taking the brunt of Beijing's decision to ban tours to South Korea. The conglomerate also is struggling as most of its Lotte Mart stores in China had to suspend operations allegedly for fire safety violations.

Such a string of hostile measures are seen as retaliations against the company by South Korea's biggest trade partner for handing over land to the military so it can used as a site to deploy a Terminal High Altitude Area Defense (THAAD) battery.

China has strongly denounced the THAAD deployment pushed by Seoul and Washington, saying it will be used to monitor its own military.

"But there is no change in our plan to carry out (an IPO) at the earliest date possible," Hwang added. 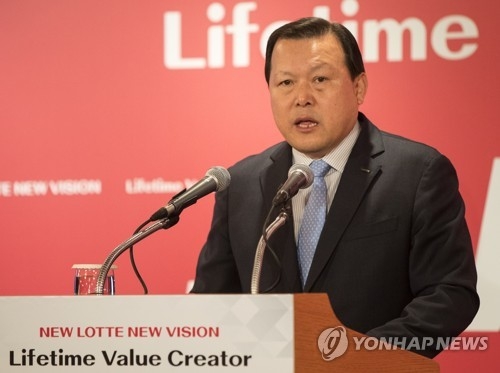 The comments came at a press conference by the country's fifth-largest conglomerate to celebrate the group's 50th anniversary of its establishment. Founded in Japan by Shin Kyuk-ho in 1967 as a small confectionery business, the company has sprawled into a conglomerate whose businesses stretch to retail, theme parks and chemicals, with sales hitting more than 92 trillion won (US$82 billion) as of last year.

Separately, the group is mired in a power struggle between the two brothers of the controlling Shin family, while they are also facing criminal charges after the local prosecution indicted the three children of the group founder on charges of embezzlement and bribery.

In a bid to tide over difficulties, Lotte unveiled a plan to revamp the business into a more transparent company, promising to achieve "qualitative growth" that brings the best service for customers.

"We'll make sure Lotte grows into a company that fosters a healthy business ecosystem, not only by creating jobs through investment but also by creating values for the society," Hwang said.

In regards to the ailing retail outlet business in China, Lotte spurned speculation over a possible pullout, saying that the group will continue efforts to bolster its offshore businesses through investment.

"We're doing everything we can in accordance with the regulations required by the Chinese regional governments," he said. "We see the Chinese business still at an early stage that needs continuous investment, which will take years until we get satisfying results."