"We will allow users of the Galaxy S8 to enjoy the 'Revolution' in the most optimized gaming environment," an official from Netmarble said, adding the company plans to provide an opportunity for visitors to play the mobile game on the latest smartphone at major Samsung shops.

Samsung showcased the Galaxy S8 and Galaxy S8 Plus smartphones in late March, which come with a 5.8-inch screen and a 6.2-inch panel, respectively. Both boast double-edged Super AMOLED screens that give the illusion of having no bezels.

This is a departure from the Galaxy S7 smartphones that came in flat-screen or curved-edge versions.

The South Korean tech giant sought to make the Galaxy S8 series "bezel-less," allowing the "Infinity Display" to take up 83 percent of the front of the device, providing users with a very immersive experience.

The Samsung DeX, which allows users to utilize the Galaxy S8 smartphone like a regular desktop computer by connecting it to a PC, is also expected to help users better enjoy games.

Netmarble said buyers of the Galaxy S8 smartphones through end-May will be provided with a gift voucher worth 100,000 won (US$89.8).

The mobile role-playing game has gained huge success by bringing in more than 100 billion won in revenue just two weeks after launch. The game was launched in December 2016. 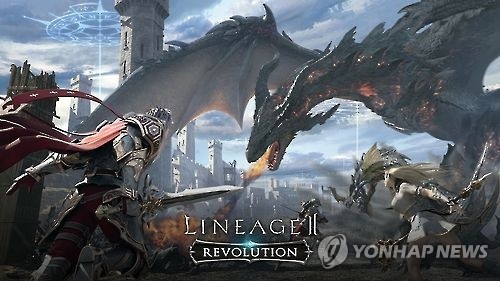