SEOUL, April 3 (Yonhap) -- St. Louis Cardinals closer Oh Seung-hwan has picked up a win after blowing a save in his season debut.

The South Korean right-hander was touched for three earned runs in 1 2/3 innings of work against the Chicago Cubs at Busch Stadium in St. Louis on Sunday (local time), squandering a 3-0 lead over the defending World Series champions.

All of the three runs came on a three-run home run by Willson Contreras with one out in the top of the ninth.

Randal Grichuk bailed out Oh with a walk-off, bases-loaded single in the bottom of the ninth, giving the Cards a 4-3 win.

Oh took over from starter Carlos Martinez with one out in the eighth and runners at first and second. Oh hit the first batter he faced, Kyle Schwarber, to load the bases for the reigning National League MVP Kris Bryant. At a 2-1 count, Oh threw Bryant a slider and got him to pop out to shallow right, not deep enough for Willson Contreras to tag home.

Oh then got Anthony Rizzo to fly out to right on a 1-1 fastball to escape the jam unscathed. 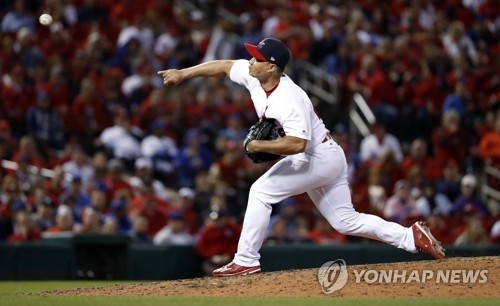 Oh hit Ben Zobrist to start the ninth inning but fanned Addison Russell on a 3-2 fastball. Jason Heyward then reached on an infield single, sliding head-first after a chopper to first baseman Matt Carpenter.

That set up Contreras' heroics for the Cubs. Oh worked the count to 1-2, but the Cubs' catcher drove a 84-mph slider over the left field wall to tie the game.

The Cardinals tried to rally in the ninth with a one-out double by Jose Martinez off Mike Montgomery. The left-hander intentionally walked Yadier Molina to bring the double play in order, but after striking out Stephen Piscotty, Montgomery walked Kolten Wong to load the bases.

Grichuk, who hit a two-run home run to put the Cards up 3-0 in the eighth, came through again in the ninth with the game-winning hit.

Oh took over from Trevor Rosenthal as the closer last summer and recorded 19 saves with a 1.92 ERA.