SEOUL, April 3 (Yonhap) -- Japan's top envoy to South Korea, who was recalled to Tokyo amid diplomatic friction over a girl statue symbolizing the victims of its wartime sexual slavery, will return to Seoul this week, a foreign ministry official here said Monday. 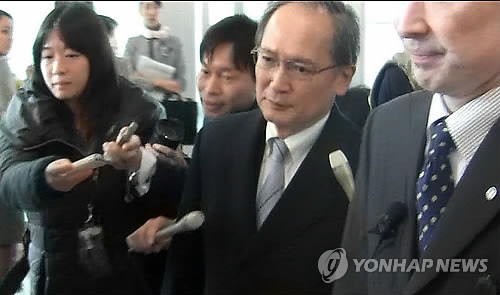 Nagamine is expected to come back to Seoul, along with Japanese Consul General in Busan Yasuhiro Morimoto, who was also recalled over the statue dispute.

It was not immediately known when South Korea was notified of his return. A Japanese Embassy official was not reached for comments and more information.

His return comes amid worries that a prolonged vacancy over the absence of the top Japanese envoy could hamper diplomatic communication between the two neighbors.

The two diplomats were called in to their home country on Jan. 9 as Japan strongly protested the installation of the girl statue in Busan.

The South Korean government has called for a appropriate solution to the dispute over the statue but veered off from making a promise to get it removed or moved to another place, saying that it is not in its purview to do so since the statue was built by civic groups.

In a press conference held in Tokyo, Japanese Foreign Minister Fumio Kishida said that the decision to send the ambassador back to Seoul was made to more effectively cope with the political situation in South Korea preparing to hold a presidential election in May and also demand faithful implementation of what was agreed upon in the comfort women deal.

South Korea is set to hold a presidential election on May 9 following the impeachment of former president Park Geun-hye. Some major presidential candidates have hinted at renegotiating the deal.

Critics in Seoul demand the cancellation of the accord, saying that the Japanese government still refuses to recognize its legal responsibility and denied the women were forcefully recruited to front-line military brothels. The deal was reached also without consultation with the victims, they said.