Hyundai Motor sold a total of 405,929 vehicles in March, down from 433,171 units a year earlier, the country's top carmaker said in a statement.

"As the company expects slowing (sales) growth in advanced markets and is not sure about an (immediate) rebound in sales in emerging markets, it will strengthen its fundamentals and actively cope with the ongoing low-growth era," the statement said without elaborating.

As part of efforts to boost its lineup, Hyundai has recently launched the Grandeur Hybrid sedan in the domestic market with a goal to sell more than 10,000 units a year. 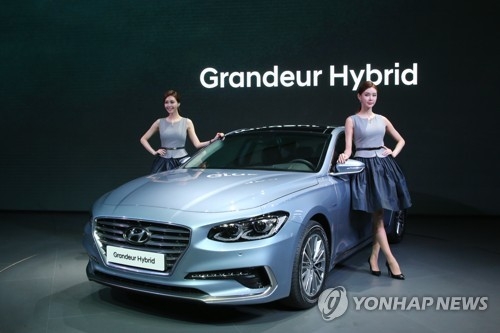 Moreover, the carmaker said Monday it will launch an all-new Kona sport-utility vehicle "this summer" to strengthen its presence in the global B-segment SUV market.

Hyundai currently does not have an SUV model in the small car segment, which is defined by the European Commission as being larger than A-segment, or city cars, but smaller than those in the C-segment, which are medium-size vehicles.

Helped by those new models, Hyundai aims to sell a total of 5.08 million units this year, higher than its actual sales of 4.86 million units tallied for the whole of 2016.

In the January-March quarter, overall sales fell 1.6 percent on-year to 1.09 million units, according to sales data released by the company.