SEOUL, April 3 (Yonhap) -- A British candidate running to become the next director-general of the World Health Organization (WHO) said Monday that health and nutrition problems facing North Korean children are a major part of his focus and he will engage with the North Korean regime to tackle them if he wins the seat.

"My basic view on all countries is that you have to start with a conversation with leaders and they have to trust you if they are going to work with you. If the conversation leads to trust, then after trust comes the opportunity for collaboration," David Nabarro said as he discussed his candidacy for the top job at the WHO with a group of reporters in Seoul.

"If I am elected as the director-general of the WHO, one of my early requests will be to engage with the government of North Korea to understand their challenges and help to reduce suffering, particularly ill heath and malnutrition, among children," he said, citing food shortages facing North Korean children as one of his policy focuses.

The British medical doctor with a lifelong career in global health and development is competing with two former health ministers from Ethiopia and Pakistan to succeed incumbent WHO Director-General Margaret Chan. The final vote is scheduled for late May.

Nabarro stressed that nutrition during the so-called "thousand vital days" dating from a baby's conception to its second birthday is an enormous factor to determining the child's ability to learn in school and to contribute productively to economic development.

"I don't think it's right that children should experience malnutrition in their early years and then experience the disadvantages it will bring when they get older. So I would want to reduce stunting now anyway regardless of the unification prospect," he said, touching on the possibility that malnourishment could become a source of discrimination if the North reunifies with South Korea.

Currently, Nabarro is touring the Asia-Pacific region in a bid to gather support for his candidacy. In Seoul, he met with South Korean health and foreign ministry officials to discuss the priorities he will pursue at the desired post.

On top of the priorities will surely be efforts to fight outbreaks of contagious diseases, the British doctor said.

"The challenges faced by the WHO are serious. We must be strong and effective whenever there are infectious diseases," he said.

Strong and informed leadership is most needed when facing a contagious disease, he emphasized. "Because of the speed with which they became a national crisis ... the most important requirement is firm and intelligent leadership to support countries when they are dealing with these challenges."

"This is the way I will serve the world. A leadership in infectious disease," he said. "I believe that world leaders can trust me to help get good leadership on world health for years to come."

He also recalled his time with Ban Ki-moon during his 10-year term as the secretary-general of the United Nations. "I admire his leadership because he has always had a culture of service to the world. He taught me the best practices in public service," he said.

"I have to say South Korea is generous" in its contributions to global health, he also noted, citing the Asian country's hosting of the International Vaccine Institute as well as the dispatch of a special anti-Ebola medical team to Africa about two years ago. 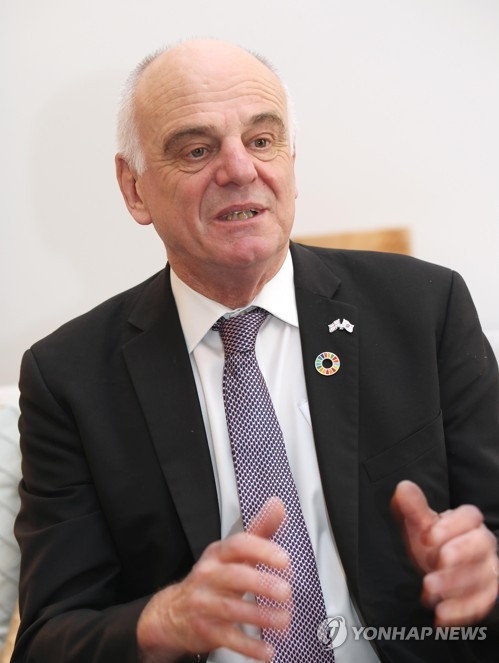