SEOUL, April 3 (Yonhap) -- South Korean Defense Minister Han Min-koo on Monday stressed the need for a watertight security partnership with the United States to counter North Korea's provocations as he met with a top American commander in Seoul, according to his ministry.

Han pointed out that the North's nuclear and missile capabilities are continuing to make headway, with the communist nation all set to conduct another nuclear test at the leadership's choosing.

He was quoted as telling Adm. Scott Swift, commander of the U.S. Pacific Fleet, "Under the grim security circumstances, a robust response posture and watertight coordination against North Korea are more important than ever." 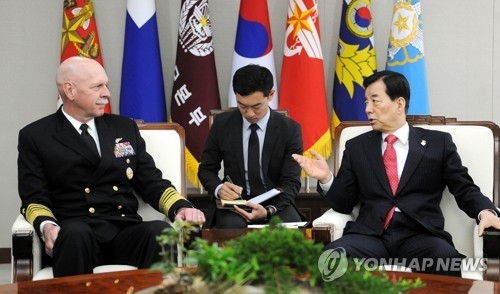 The allies' ongoing annual joint military drills are making a big contribution to successfully deterring the North, he added.

The navies of South Korea, the U.S. and Japan also launched a rare combined anti-submarine exercise earlier in the day, mobilizing some major warships and other assets.

Echoing Han's view on the security conditions of the peninsula, the U.S. commander assured him that Washington's "ironclad" security commitment to the defense of South Korea remains unchanged, said the ministry.