SEOUL, April 3 (Yonhap) -- Presidential front-runner Moon Jae-in was nominated Monday to lead the liberal Democratic Party in the upcoming presidential election after making a clear sweep of all four rounds in the party primary.

The former chief of the nation's largest party won 57 percent of some 1.4 million votes cast in the primary held over the past eight days, according to the party.

He avoided a run-off by scoring a majority of ballots cast in the primary. Otherwise his rivals could have teamed up to challenge him in an additional round of voting. 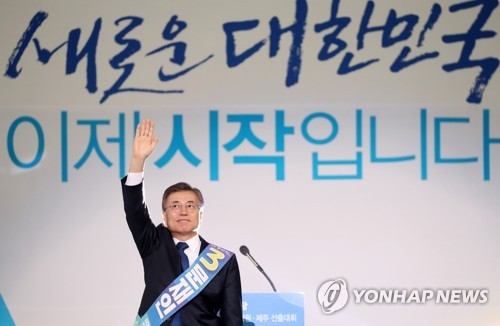 Moon, a former human rights lawyer and chief aide to the late former President Roh Moo-hyun, calls for the restoration of inter-Korean dialogue and cooperation and expanded government spending for the welfare of low-income citizens.

With his nomination, the stage is nearly set for the May 9 election with only the People's Party still to choose a candidate.

The center-left party is set to wrap up its primary on Tuesday, when its co-founder and former chief Rep. Ahn Cheol-soo was widely expected to emerge as the winner. 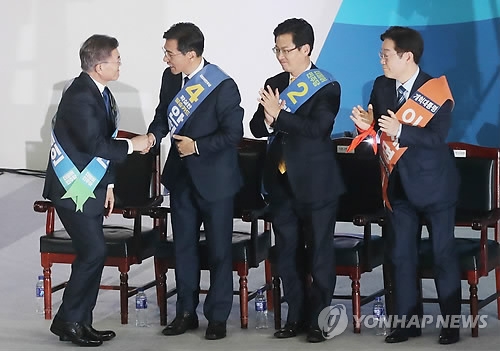 Speaking to party officials and supporters after his nomination, Moon said the upcoming election will mark a matchup between right and wrong, rather than conservative and liberal as previous presidential elections did.

"We must prevent the evil forces from extending their regime and turn the nation back to a country of the people," Moon said in his acceptance speech.

The upcoming election marks a rare presidential by-election, prompted by the March 10 removal of former President Park Geun-hye over a massive corruption scandal. She was arrested last week on charges including bribery, coercion and abuse of power.

Moon said he will, if elected, certainly revitalize the Korean economy, enhance national security, and eradicate "injustice, corruption and inequality."

"I am not saying we must exclude or ostracize certain persons, but that we must move toward a fair society," he said.