Seol Min-suk has claimed during his recent lecture and book on Korean history that the 33 signatories of a 1919 independence declaration, which started a nationwide uprising against the colonialists, "drank in the daytime at a hostess bar" called Taehwagwan, in Seoul.

He also claimed that Sohn Byeong-hee, one of the 33 leaders, was on intimate terms with the bar's "senior hostess," Ju Ok-kyung, who became his third wife later.

Historians say 29 of the 33 representatives, with the remaining four staying outside Seoul, held a ceremony at the Taehwagwan restaurant on March 1, 1919, to announce the Korean Declaration of Independence. The Korean Peninsula was under Japan's rule from 1910-45.

In their complaint filed with the Seoul Southern District Prosecutors' Office, the group of bereaved family members said Seol's remarks constitute defamation of the dead.

"We have sent Seol a statement asking him to offer a sincere apology over his remarks," the group said. "But his lack of answer or intention to apologize compels us to file the suit. His remarks are very insulting to those martyrs who fought for the country's independence."

The descendants of Sohn also filed a libel suit with a branch of the Suwon District Prosecutors' Office, south of Seoul, against Seol for the same charge of defaming a dead person. 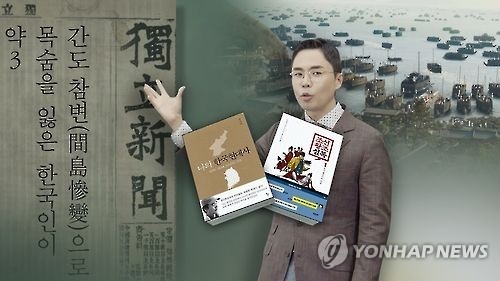