SEOUL, April 4 (Yonhap) -- The centrist People's Party is set to nominate its presidential candidate Tuesday, setting the stage for a possible matchup between its favored contender and front-runner Moon Jae-in.

The minority party was to hold the seventh and final round of its primary in Daejeon, 164 kilometers south of Seoul, before announcing its presidential nominee for the May 9 poll. The last round covers Daejeon, the nearby city of Sejong and the surrounding Chungcheong provinces. 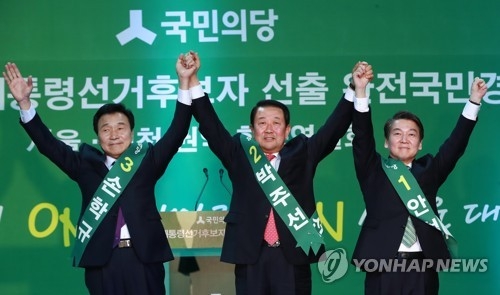 Rep. Ahn Cheol-soo, a co-founder and former leader of the party, has won all six previous primaries to amass 71.95 percent of the vote. He is trailed by former opposition leader Sohn Hak-kyu at 19.8 percent and Deputy National Assembly Speaker Park Joo-sun at 8.25 percent.

The party will combine the votes with the results of a two-day opinion survey by an 8:2 ratio, but if no candidate secures a majority of the ballots, it will hold a run-off on Thursday.

In the absence of a major upset, Ahn appears set to clinch the nomination, which will complete the lineup for the early election that comes in the wake of the ouster of President Park Geun-hye.

Ahn's nomination, if confirmed, will draw him into what many observers expect to be a two-way race with Moon.

According to the latest poll by Realmeter, Moon maintained his lead for the 13th consecutive week with 34.9 percent but faced a growing challenge from Ahn, who jumped 6.1 percentage points to 18.7 percent.

The People's Party's nomination is also expected to accelerate talks for a possible merger of candidacies aimed at toppling Moon.