GANGNEUNG, South Korea, April 3 (Yonhap) -- North Korean women's hockey players enjoyed some downtime in between their games in South Korea on Monday, taking in the sights of an East Sea beach here with geopolitical tensions on the peninsula apparently not on their minds.

The delegation of 20 players and 10 coaches and officials traveled across the border amid rising tensions on the peninsula with Pyongyang's threat of a nuclear test. The much-anticipated all-Korea showdown is set for 9 p.m. Thursday. 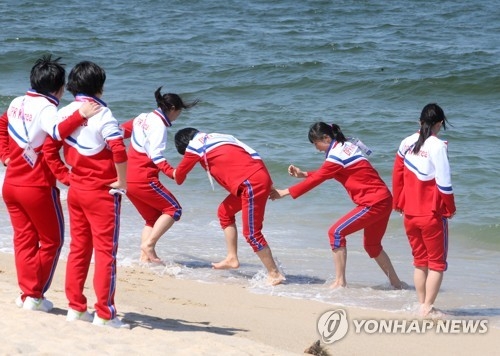 While it's unclear just how much of an impact the hockey team's trip will have on easing strained inter-Korean relations, the players at least haven't seemed too concerned about diplomatic friction.

Before taking on the Netherlands Monday here in the seaside city, some 230 kilometers east of Seoul, the players hit the beach on a balmy spring day with the temperature reaching 21 degrees Celsius (70 degrees Fahrenheit).

Surrounded by security guards, the players took a stroll in a pine forest near Gyeongpo Beach and dipped their feet into the water, while walking barefoot on the sand.

All dressed in the official team sweats -- with the letters DPR Korea, short for Democratic People's Republic of Korea, on the back -- the players also drew the attention of curious onlookers. 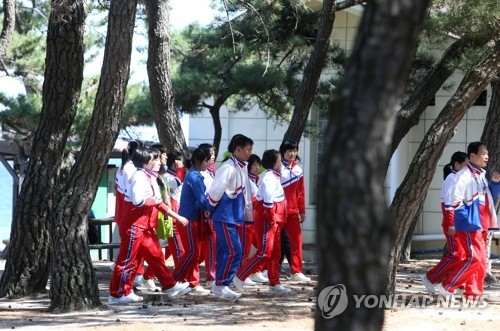 After their first game Sunday at Gangneung Hockey Centre, none of the players spoke to the media. But while attending the night cap between South Korea and Slovenia at Kwandong Hockey Centre, the North Korean players, the majority of them in their early to mid-20s, were the picture of youthful exuberance.

They were seen sharing laughs with each other while drinking Coca-Cola -- a symbol of capitalism -- in the stands. Security forces hired by the local organizing committee have been omnipresent around the delegation so far at the tournament, and the players were also accompanied by senior sports officials Sunday. But the young athletes seemed blissfully unaware of their presence, at least for this particular occasion.

A South Korean civic group has put together a cheering squad for North Korea with about 300 members. They plan to attend all North Korean games through the tournament, which wraps up Saturday.

After Sunday's game, the North Korean players lined up before the section occupied by the South Korean supporters and bowed their heads and lifted their sticks in appreciation. 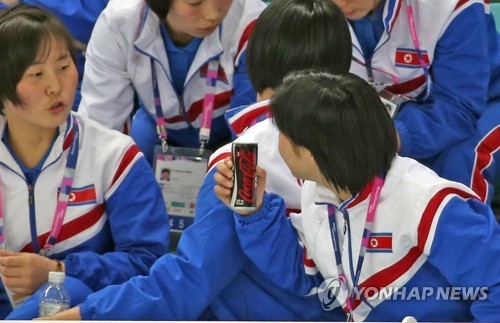