The opening ceremony of the 123-story Lotte World Tower was attended by top Lotte executives including Chairman Shin Dong-bin and government officials and industry representatives, its operator Lotte World said in a release.

Building a skyscraper that will attract visitors from around the world had long been a dream for the group's founder Shin Kyuk-ho, until the envisioned plan finally became a reality nearly three decades after he first unveiled the proposal.

The launch of the landmark coincided with the 50th anniversary of the group's establishment and comes at a difficult time for the retail and food conglomerate. 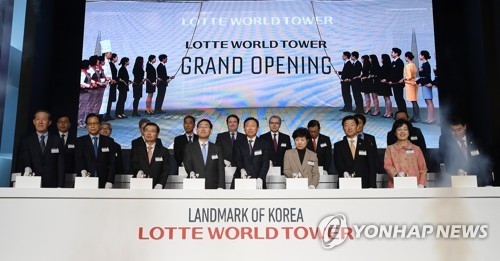 It is embroiled in a swirl of troubles from its business operations in China and legal disputes involving the chairman and his brother over leadership succession. Separately the Shin family is also facing corruption charges in relation to an influence-peddling scandal that led to the ouster of Park Geun-hye as president.

Due to health issues, the founder, 95, didn't appear at the ceremony, while his second son Dong-bin was present throughout to welcome the guests.

"As Korea's landmark, we want to make the Lotte World Tower the pride of this country. We will make sure Korea becomes the world's most famous tourist destination by securing an annual 100 million visitors from around the world," Shin said.

The 555-meter high building consists of offices, a lavish residence and luxury hotel named Signiel Seoul, and is topped with a glass observation deck.

On Sunday, Lotte held a fireworks display to showcase the opening of the skyscraper. More than 400,000 people gathered to see the show, which involved some 30,000 fireworks going off to light up the building, according to Lotte. 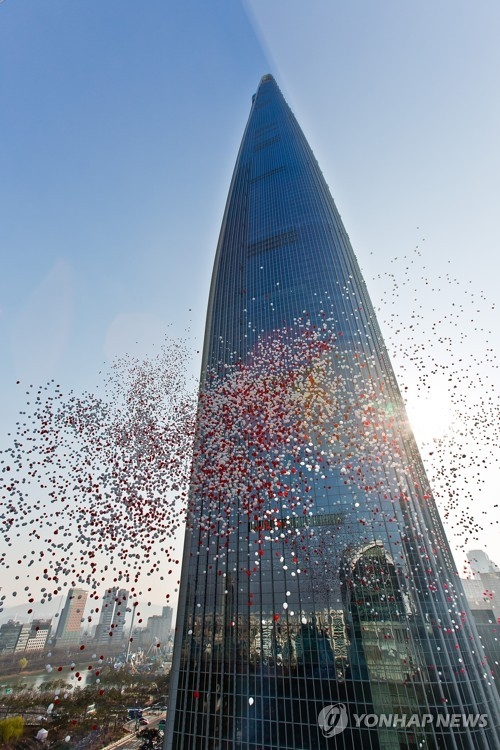