The national debt that covers the central and provincial governments' accounts and funds reached 627.1 trillion won in 2016, up 35.7 trillion won from a year earlier, according to the 2016 settlement of accounts endorsed by the Cabinet. The report will be submitted to the National Assembly by May after a review by the Board of Audit and Inspection.

It accounted for 38.3 percent of the country's gross domestic product (GDP), down 0.5 percentage point from a year earlier.

The Ministry of Strategy and Finance said the 35.7 trillion won on-year gain included 31.8 trillion won worth of state debt raised by Treasury bonds.

"National debt has been on a steady increase for a decade, with an on-year growth of around 40-50 trillion won," Lee Seung-chul, director general for fiscal management bureau at the finance ministry, told reporters. "The pace slowed down slightly last year to 35.7 trillion won. We will watch closely whether the slowdown trend will continue."

The South Korean government set aside an extra budget of 11 trillion won last year to prop up the faltering economy, which grew 2.7 percent due to weak exports and waning domestic demand.

Asia's fourth-largest economy saw its exports post negative growth for nine months last year, with a 5.9 percent decline for the whole of 2016.

Meanwhile, the gross revenue that the government brought in last year came to 401.8 trillion won, as its tax earnings expanded due to increased real estate transactions, while its expenditures totaled 384.9 trillion won.

As a result, its surplus reached 16.9 trillion won last year, a turnaround from a deficit of 200 billion won in 2015. 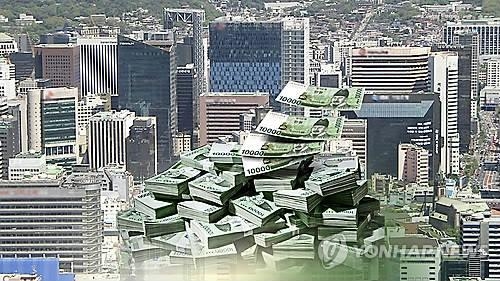