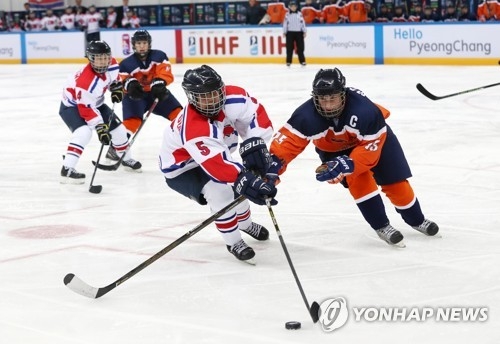 Located in Gangneung, Gangwon Province, some 230 kilometers east of Seoul, the arena is one of two competition venues, along with Gangneung Hockey Centre, in the city.

The tournament also features host South Korea (No. 23), Britain (No. 21), Slovenia (No. 24) and Australia (No. 28). The top nation after round-robin play will be promoted to Division I Group B next year, while the last-place nation will be relegated to Division II Group B in 2018.

The two Koreas will square off at 9 p.m. Thursday at Gangneung Hockey Centre.

North Korea opened the tournament with a 2-1 loss to Australia on Sunday, submitting lethargic efforts on both ends.

Against the Netherlands, North Korea competed with more urgency, and the players had extra zip to their passes and shots.

The Netherlands still got on board first, as Julie Zwarthoed banged home the rebound following Maree Dijkema's shot at 8:47 in the opening frame.

North Korea kept attacking and evened the score on a penalty shot by Kim Un-hyang at 2:41 in the second. Myrthe Martens was penalized for slashing a North Korean player on a clear breakaway, and Kim, who scored North Korea's lone goal on Sunday, beat goalie Lisa Daams with a sweet fake.

North Korea went ahead less than six minutes later, with Jong Su-hyon feeding Kim Hyang-mi from behind the net on a power play.

North Korea's lead lasted barely three minutes, as Cloe Keijzer's slap shot off a face-off beat goalie So Jong-sim high on the glove side at 11:21.

The Netherlands went ahead for good with a power-play goal by Savine Wielenga, who slapped one home from the top of the left face-off circle at 18:59.

Mieneke de Jong added an insurance goal for the Dutch on a 5-on-3 power play at 9:07 in the third, deflecting home a point shot by Keijzer for a 3-2 advantage. 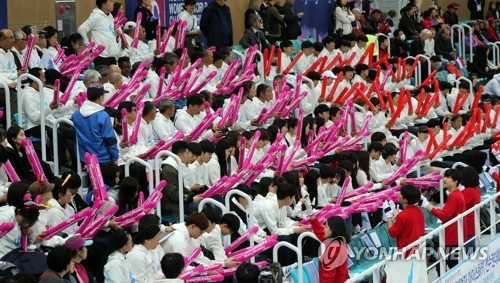