SEOUL, April 3 (Yonhap) -- Kim Chong-in, former interim leader of the Democratic Party, said on Monday he will announce his presidential bid this week, in an apparent move to start a middle-of-the-road campaign to challenge front-runner Moon Jae-in of the liberal party.

In a meeting with Cardinal Andrew Yeom Soo-jung at Myeongdong Cathedral in central Seoul, Kim said that he's "thinking of announcing his presidential bid sometime around the day after tomorrow." It marked the first time Kim publicly mentioned his presidential ambitions.

Kim, an influential political strategist, defected from the nation's largest party in March amid speculation that he is seeking to play a central role to realign centrist forces ahead of the presidential election.

During the meeting, Kim said he made the decision because "the nation is in chaos."

"I've mostly played the role of aiding good presidents in hopes of the country's improvement," he said, adding that past leaders "have disappointed the people and in hindsight caused the political situation of today."

Kim confirmed his presidential ambition in a text message to reporters, saying that he will hold an event on Wednesday at the Korea Federation of SMEs in central Seoul.

After the meeting, Kim suggested the possibility that he would try to produce a single unified candidate among the moderate-to-conservative spectrum of candidates.

"Not having a unified candidate just now doesn't mean that it will be like that forever," Kim told reporters.

Moon invited Kim to become interim leader in January last year in line with the party's preparations for parliamentary elections three months away. Kim is considered a figure who holds wide connections with both the left and right. 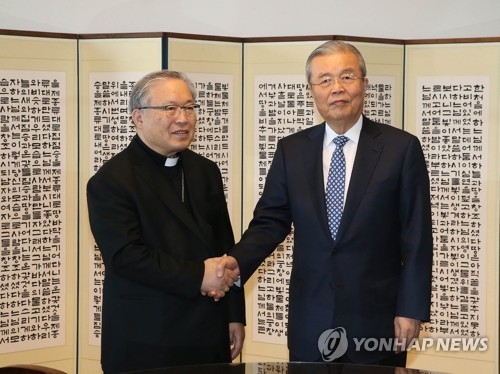